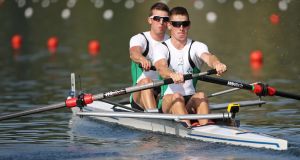 Mark O’Donovan and Shane O’Driscoll: will be medal contenders at the World Rowing Championships in Sarasota-Bradenton in Florida. Photograph: Philipp Schmidli/Getty Images

The Irish boats left on Thursday for the World Rowing Championships in Sarasota-Bradenton in Florida.

The Ireland team sets forth in just 10 days (August 28th) for the event, which runs from September 24th to October 1st. The team is surprisingly large, with the big talking point the addition of a men’s and women’s pair to the three proven lightweight crews and double Olympian Sanita Puspure in the heavyweight single.

The competition for the pairs will be hot, and neither crew has much experience at this level. Aifric Keogh and Aileen Crowley raced at the World Cup in Poznan this season and finished last, second in the B Final. Patrick Boomer was part of the Ireland under-23 team in 2016, while Fionnan McQuillan-Tolan, who has been in college in Boston, competed at under-23 level for his country in 2013 and 2014.

Ireland heavyweight coach Sean Casey says both crews have been in good form, but freely cites their inexperience.

“I’m not naive,” he said. “This is part of a bigger aim, to qualify men’s and heavyweight boats [or the Olympics] in two year’s time.”

The first – and best – chance for boats to nail down a place in Tokyo 2020 is to secure their spots at the World Championships in 2019 in Austria.

Casey confirmed that each Ireland crew which competes in Florida will have as a basic target a place in the A/B semi-finals.

This should be well within the powers of the other four crews. All the lightweight crews have taken medals this season, with the pair of Mark O’Donovan and Shane O’Driscoll outstanding in their gold-medal run through World Cups and European Championships.

Denise Walsh has World Cup and European Championship medals this season and the lightweight double of Gary and Paul O’Donovan will be medal contenders in Florida. The O’Donovans’ battle with Pierre Houin and Jeremie Azou of France may be a story of the Championships.

Puspure, a double Olympian, prevailed in her two World Cup shoot-outs with Monika Dukarska with enough to spare that she holds her berth in the single.

Back home, the All-Ireland Coastal Rowing Championships in Ballyshannon occupy pride of place this weekend (August 18th to 20th), with huge interest both on and off the water. The finals on Sunday will be streamed live – see coastalrowing.net for the link.

Rowing Ireland has no direct connection to the event, but does administer Fisa coastal rowing. To distinguish this discipline from the coastal events which come under the aegis of the Irish Coastal Rowing Federation, there will be a rebrand of Rowing Ireland coastal rowing activities as Offshore Rowing. In three weeks, the big domestic event for this activity will be held in Arklow: it will now be called the Irish Offshore Rowing Championships.

For Olympic-class hopefuls the Irish Open will again take place this year, on October 7th and 8th. It effectively begins the process of testing and drawing in every athlete who wishes to represent Ireland in the coming season.

It has found its place as a popular event and draws the top internationals. However, because of the timing of the World Championships this year, those competing in Florida will not have to enter the regatta at the National Rowing Centre.

The Irish Open was instituted by former high performance director Morten Espersen. The Dane has now gone, but he has left his mark in many ways: the structure for what has proved a very successful season was put in place by Espersen.