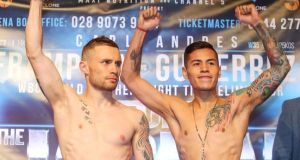 Carl Framton’s fight with Andres Gutierrez has been called off. Photograph: Jonathan Porter/Presseye/Inpho

Carl Frampton’s postponed fight with Mexico’s Andres Gutierrez will not take place after talks to find a new date failed.

The bout was originally scheduled for July 29th but was called off with less than 24 hours’ notice after Gutierrez slipped in the shower and suffered a concussion as well as facial wounds.

Cyclone Promotions announced late on Thursday that attempts to find a new date for Frampton’s Belfast homecoming had failed.

“Since the unfortunate postponement of the fight between Carl Frampton and Andres Gutierrez on Saturday 29th July 2017, Cyclone Promotions, The SSE Arena, Belfast, boxing authorities and relevant broadcasters have been working to agree a new date for the fight,” a statement said.

“Unfortunately a proposed date in November was unsuitable to all parties. It is therefore with regret that we are announcing the cancellation of this event.

“We are all profoundly disappointed for the fans, the boxers and those who have worked hard with and supported us on this event.”