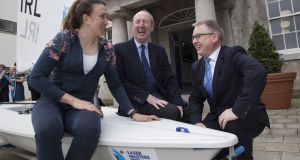 Irish Laser sailing is on the crest of a wave this week with the announcement that the World Masters Championships will sail from Dun Laoghaire in 2018. It’s the second major world Laser championships within three years for Dublin Bay.

Since Annalise Murphy’s 2016 Olympic silver medal, Irish Laser interests have been lifted domestically with some buoyant 2017 turnouts but the award of a further worlds for the east coast port is internationally important for Ireland’s biggest sailing centre.

The single-hander event will run from September 7th-15th in 2018.

The Laser, an Olympic class since 1992, is one of the most popular single-handed dinghies in the world, with more than 250,000 boats sold worldwide.

Simple to rig and sail, the one-person boat provides very competitive racing due to the very tight class association controls which eliminate differences in hull, sails and equipment.

Although Annalise Murphy will be ten years too young to participate in the Masters, the silver medalist is acting as an ‘event ambassador’ for the Olympic class in her home port. Her father, Con Murphy, will be chief race officer.

Dun Laoghaire’s successful bid comes quickly after the town’s successful staging of the 350-boat Laser Radial World championships when 48 nations were hosted in July 2015, an event estimated by the yacht clubs to have been worth €2.5m to the local economy.

Last weekend, the first of the season’s Laser provincial championships attracted a fine turnout of 125 boats to Baltimore in West Cork to decide three CH-Marine sponsored Munster titles which all stayed in the province.

In the standard or full rig, Kinsale Yacht Club helmsman Darragh O’Sullivan beat Fionn Lyden of the host club in a the 34-boat fleet. Third was Ronan Walsh of Royal Cork.

In the 45-boat Laser Radial fleet, Walsh’s club-mate Johnny Durcan was two points clear of Ewan MacMahon of Howth Yacht Club to take the title. Third was Aisling Keller of Lough Derg Yacht Club who finished on the same points tally as MacMahon.

Laser Radial and 4.7 youths battle again this morning at the first ever staging of the Irish Sailing Association’s (ISA) youth pathway championship in Northern Ireland.

The Durcan v MacMahon match in the boys Radial will be centre stage in the weekend proceedings that also count as a trial for ISA squad membership.

Back on Dublin Bay, its local Laser fleet of 20 boats is one of 22 classes mustering for next week’s first race of the Sherry Fitzgerald-sponsored Dublin Bay Sailing Club (DBSC) season. Class captain Ross O’Leary has appealed for lapsed Laser sailors to rejoin with a promise of ‘short, sharp harbour racing’ for all comers from next Tuesday.