‘Losing points for a team, particularly when you could have won, is painful,’ he said 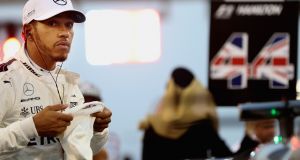 Lewis Hamilton: “You are supposed to have a five-second gap and I think I had a four-second gap. Just a misjudgment from myself.” Photo: Mark Thompson/Getty Images

Lewis Hamilton has apologised to his Mercedes team after he incurred a penalty that ensured he finished second behind the Ferrari of Sebastian Vettel at the Bahrain Grand Prix.

The two teams had been very evenly matched in race pace but Ferrari’s aggressive pit strategy gave Vettel the advantage, and when Hamilton pitted under the safety car he was too slow into the pit entry and took a five-second penalty. Vettel’s wining margin was 6.6sec but the error cost Hamilton any chance to challenge him for the win.

Hamilton said of his error: “Yeah, completely my fault with the safety car. You are supposed to have a five-second gap and I think I had a four-second gap. Just a misjudgment from myself. Apologies to the team but I tried the best I could to recover it and we still got good points for today.

“Of course the disappointment is there. Losing points for a team, particularly when you could have won the race, is definitely painful but I gave it everything I could.

“I try to handle it the best way I can but it eats you up a little bit inside and you have just got to try and cope and move forwards. Today there were certain things that if they were perfect I would have been in a much better position to fight for the win and I put myself in that position.”

Hamilton had pitted behind Valtteri Bottas, who had started on pole but finished third, and because both Mercedes drivers came in under the safety car at the same time the Briton had to wait while his team-mate took new tyres. To try to minimise the delay he slowed on entry backing up the Red Bull of Daniel Ricciardo. The incident was investigated immediately by the stewards and he was given the penalty shortly afterwards. The Mercedes non-executive chairman, Niki Lauda, believed the moment had been decisive.

“Without the penalty he could have still won the race,” he said, but also acknowledged Ferrari had called their strategy well. “Ferrari had the right pit stops at the right time, did everything right and deserved to win.”

Ferrari had called Vettel in early and his pace on fresh rubber gave him the lead and track advantage. The team have been reinvigorated by the performance of their car this season after three years of Mercedes dominance and are showing a determination to match it with their calls from the pit wall having been equally astute in the opening race in Melbourne, where Vettel also won.

“I think the team has obviously done a really great job,” Vettel said. “A lot of hard work, commitment, things start to click and hopefully that sort of success now in the first couple of races helps us to build up some sort of momentum that Mercedes had in the past and the last couple of years, so they will be the ones to beat.”

The Mercedes executive director, Toto Wolff, said his team would now analyse whether it was time to put their full weight behind Hamilton, who trails Vettel by seven points in the championship as their main shot at the title. Wolff was unhappy with the outcome but looking forward to the challenge presented by their rivals. “Losing make you feel much worse, wining makes you feel great,” he said. “At this moment it feels really wrong but bouncing back and winning feels even better. For Formula One it is good there is a fight between Ferrari and Mercedes, we have to see it as sportsmen. We have a fight that is on and that is how it is even though it feels shit right now.”