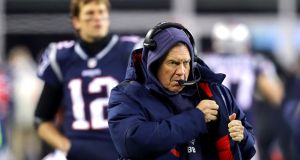 On YouTube, there’s a video of the best and most taciturn NFL coach of the modern era croaking back-up vocals as Jon Bon Jovi belts out Wanted Dead or Alive.

In the clip, Bill Belichick looks distinctly uncomfortable, like the sober guy reluctantly dragged up on stage for a drunken singalong at the afters of a wedding.

It’s a remarkable piece of footage because Belichick’s default countenance when standing sentry on the sidelines for the New England Patriots is so studiously dour and determinedly glum that, usually, he makes Jim Gavin look like an over-caffeinated Jurgen Klopp.

A long-standing friendship with Bon Jovi shows merely one aspect of this curious and laconic character.

In 2002, David Romer, an economics professor at the University of California, Berkeley, wrote a paper for the obscure Journal of Political Economy entitled “It’s fourth down and what does the Bellman Equation say? A dynamic-programming analysis of football strategy”.

Not only was Belichick the first NFL coach to read Romer’s statistical argument that teams should go for it more on fourth down rather than punt, he was one of the few to accept that a number-crunching academic might actually know something that he didn’t.

This willingness to learn and a forensic approach to preparation are just some of the reasons why, against the Jacksonville Jaguars this Sunday, Belichick’s team stand one win away from reaching their eighth and winning their sixth Super Bowl since he took over in 2000.

This season’s inexorable pursuit of the Vince Lombardi trophy has been a tad different than previous editions, attended by an unusual amount of melodrama surrounding his deteriorating relationship with age-defying 40-year-old quarterback Tom Brady and owner Bob Kraft. Following a recent ESPN investigation of the Foxboro soap opera, there have been wild rumours that, once this campaign ends, Belichick will be on his way.

Preposterous as that sounds, with Belichick, anything is possible. This is the man who used the press conference where he was supposed to be introduced as the new head coach of the New York Jets to announce his resignation and move to the Patriots, their most hated rivals. The present bout of fevered speculation regarding his future is founded on the belief that Kraft has sided with Brady (and his dodgy supplement-flogging personal fitness guru Alex Guerrero) in a power struggle between the most successful quarterback-coach tandem in the history of the sport.

That the media have been feasting on the presumed end of the affair is ironic because nobody in American sport has evinced more contempt for journalists than Belichick. His press conferences are the stuff of dire legend, painful instances of performance art where he is either being an ignorant boor, a belligerent troll, or some dreadful combination of both. With a gruffness Roy Keane could only aspire to, routine enquires about the fitness of players or key moments in games are met with one word answers, deliberately awkward silences, and hangdog stares.

It’s not that he doesn’t have a facility with language either. Witness the remarkably obsequious personal letter/slice of fan fiction he sent to Donald Trump the day before the 2016 presidential election.

“Congratulations on a tremendous campaign,” wrote Belichick. “You have dealt with an unbelievable slanted and negative media, and have come out beautifully – beautifully. You’ve proved to be the ultimate competitor and fighter. Your leadership is amazing. I have always had tremendous respect for you, but the toughness and perseverance you have displayed over the past year is remarkable. Hopefully tomorrow’s election results will give the opportunity to make America great again.”

Supporters of every other NFL team might argue the pair of them are well-suited given Belichick’s nefarious history of bending the rules in search of unfair advantage.

He was caught videotaping the training sessions of his opponents, has been accused of signing free agents from rivals just to access their playbooks (the manual containing every tactical permutation they deploy), and, perhaps most infamously, presided over a regime where Brady was found guilty of deflating match balls. He’s even been fined for obfuscating and exaggerating the mandated injury update reports t each club must submit every week. His mantra seems to be you mess with your opponents’ heads any way you can.

Brady, Belichick and Kraft stop feuding long enough to put out statement about how they are not feuding

“What a vile thing is Evil Little Bill,” wrote George RR Martin. As a long-suffering Jets’ fan and author of Game of Thrones, Martin is somebody who knows a thing or two about villainy and he epitomises how the rest of the league have come to regard Belichick. The pity is that the antipathy towards him and the legitimate disgust at his serial cheating inevitably tends to obscure the true breadth of his achievement.

Here’s a guy who started out earning $25 a week as a video assistant with the Baltimore Colts and seemed destined to be nothing more than a career assistant-coach, especially after floundering during a brief stint in charge of the Cleveland Browns. His recovery from that and the way in which, with Brady always delivering when it mattered most, he kept several different iterations of the Patriots at or near the top for nearly two decades is one of the great NFL stories.