US gymnastics doctor confronted in court by women he abused

Three-time Olympic gold medalist Aly Raisman told her abuser and former physician, Larry Nassar, he "should have been locked up a long, long time ago." Nassar is serving a 60-year-sentence for criminal sexual conduct. 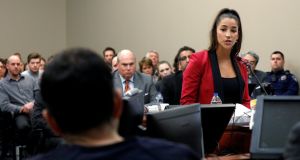 Olympic gold medallist Aly Raisman, one of more than 100 women who have told of being sexually abused by former US gymnastics team doctor Larry Nassar, confronts him in court on January 19th. Photograph: Brendan McDermid/Reuters

He gave them gifts, invited them to his house, and brought them ice packs and wiped away the blood when they were injured. He called them nicknames, like “goofball”. The young women, many of them aspiring gymnasts, considered Dr Lawrence Nassar their advocate, a sports medicine “guru” who would help cure them of their pain.

But on Monday in a Michigan courtroom, on the fifth day of Nassar’s sentencing hearings, dozens of women spoke out or had their statements read aloud for them – statements about how, after winning their trust, he sexually molested them.

They described being misled as children and teenagers, saying that they saw Nassar as a trustworthy saviour who consoled them or wiped blood from their faces, and as a man they looked up to as a prominent doctor in gymnastics.

As nearly 100 women did last week, they offered remarks that went beyond the emotional and graphic stories of sexual abuse by Nassar when they were sent to him as young athletes. On Monday, more than a dozen asked how the abuse could have gone on for decades, and why organisations – such as the national gymnastics governing body and Michigan State University, his employer – enabled him or turned a blind eye.

On Monday, several top board members of USA Gymnastics announced their resignations, including the group’s chairman, vice chairman and treasurer. On Saturday, a Michigan State trustee, Mitch Lyons, dissented from the board’s public support for its president, Lou Anna Simon, calling for her to resign amid questions around her knowledge about Nassar’s behaviour.

Back in the courtroom, the women, mostly gymnasts but also some dancers, rowers and runners, addressed Nassar. Some of the women gave only their initials to identify themselves; one was overseas serving in the military. During the testimony of a mother who remained anonymous, the live footage was muted but cameras focused on Nassar showed a tear roll down his cheek. At times throughout the day, he seemed to be breathing deeply. And he often maintained a downward gaze as he appeared to listen.

Krista Wakeman (28) came forward publicly for the first time. The birth of her baby girl six months ago spurred her to speak out, she said. “I feel like I had to do this for her,” she said of her child. “To teach her that this is not OK. That nothing about this is OK.”

Wakeman’s mother was by her side and convulsing in tears as Wakeman told of the abuse she endured when she was 16. Nassar was so calculated, she said, that her boyfriend, who was in the room at the time, did not realize what was transpiring.

She confided what had happened to her sister, who had been a patient of Nassar’s for years. He manipulated not only our bodies, but also our minds, Wakeman said. “You are a sick man, Larry,” she said, addressing him directly. “I hope you rot in prison because that’s where you belong.”

Sherry Bradley, the mother of a victim, Vanasia Bradley (19), called Nassar an “insidious monster”. “Every part of my body screams in agony,” she said.

Catherine Hannum (26) said in a statement read on her behalf that it was her self-doubt at the time of the abuse that torments her. Even when Nassar fondled her breast and had an erection during an appointment, she questioned what she was seeing. “I was so brainwashed then,” she said.

Bailey Lorencen (22) said gymnasts waited until hours after the gym closed to fit into his schedule. “Looking back now as a woman I am appalled what my child self went through,” she said.

Marta Stern said that when she was a child gymnast, he molested her until she was so “sore and raw” that she had to lean the seat back during the drive home. She was seeing him for treatment for back pain. “Your monstrous acts have taken away so much from so many,” Stern said. She said she felt “soreness, self-loathing and humiliation” after the abuse. “My silence ends today,” Stern said.

Another woman, Charla Burill, said she was still struggling to resolve what had happened to her. “From the day I heard you denied it, I began to question my own memories,” she said of Nassar in a statement read on her behalf. “Now I don’t know: Did you molest me, or was it treatment?” she asked, adding that a chiropractor she had seen had performed a similar treatment on her. “I cannot confidently say what you did was wrong and move on,” she said. “A person should not walk around wondering if she was molested or not. But because of you, I do.”

As the women approached the podium, they were welcomed by Judge Rosemarie Aquilina of Ingham County Circuit Court, who called them “survivors” and said she would hear statements from more than 140 women altogether, possibly through Tuesday. Nassar, who has already received a 60-year sentence for child pornography, will be sentenced after the statements are finished.

After each of them spoke, the judge addressed them again, encouraging them to leave their painful memories behind. “No sister survivor warrior’s voice goes undiluted here,” the judge said. “You are the new generation of superheroes. Congratulations.”

The testimony has come from Olympic-level and aspiring athletes. Last week, Aly Raisman (23), who won gold medals at the past two Summer Olympics, and a teammate at the 2012 London Games, Jordyn Wieber, were among the women who identified themselves in court as victims of Nassar.

Many of the women who have spoken so far have said that they wished at one time to remain anonymous or to not join the parade of accusers who faced Nassar, sitting in front of them in handcuffs, in court. But as the statements, broadcast live, continued last week, they said they were emboldened by solidarity.

On Monday morning through the early afternoon, about a dozen of the 96 speakers so far had stepped up to the podium.

Nassar pleaded guilty in November to seven counts of sexual assault, and his sentencing hearing, which began last Tuesday, has been growing as the number of women who have wanted to speak in court has grown.

At one point, a lawyer sitting next to Nassar objected when Lorencen called out the defence team’s support for Nassar, including the exchange of smiles, and at one point a lawyer placing an encouraging hand on his shoulder. “I think you have thick enough skin to let it go where it should,” the judge told Nassar’s lawyer, allowing Lorencen to continue.

The case and testimony have had an effect outside of the courtroom, including at USA Gymnastics. The officials there who resigned on Monday included the chairman of the board, Paul Parilla; the vice chairman, Jay Binder; and the board’s treasurer, Bitsy Kelley. They could not immediately be reached for comment.

“We support their decisions to resign at this time,” the gymnastics federation’s president, Kerry Perry, said on Monday in a statement posted on Twitter. “We believe this step will allow us to more effectively move forward in implementing change within our organisation.”

The women and teenagers who have testified have also called attention to other employers of Nassar, including the Twistars Gymnastics training centre, Michigan State and the US Olympic Committee. On Monday, the USOC praised the USA Gymnastics resignations.

Scott Blackmun, the Olympic committee’s chief executive, said in a statement that his organisation had been discussing board changes with the gymnastics federation since October. He said those talks had escalated over the weekend and culminated in the decision by the three board members to give up their roles.

“New board leadership is necessary because the current leaders have been focused on establishing that they did nothing wrong,” Blackmun said in his statement. “The Olympic family failed these athletes and we must continue to take every step necessary to ensure this never happens again.”

Still, many asked why representatives of those organisations were not attending the hearings. Emma Ann Miller (15) said she was molested by Nassar multiple times after being seen by him monthly as a 10-year-old. Miller said she was still getting billed by Michigan State for “treatments” for the last time Nassar assaulted her in August 2016.

She said the sentencing hearing was just the beginning, and that those who enabled the abuse to continue since the 1990s, even after receiving reports of it, would be held accountable. Addressing Nassar directly, she urged him to use his final statement to set the record straight, and to tell everyone in the court who knew what and when, so that others could be held accountable.

“Do the right thing for us, be honest,” she said. “One of your last public acts, actually help someone ... You need to confess the facts,” she said. – New York Times