Buffalo ‘Bills Mafia’ looking forward to their day in the sun 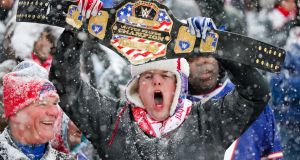 After the Cincinnati Bengals’ Andy Dalton threw a last-minute touchdown pass to defeat the Baltimore Ravens last Sunday, thereby sending the Buffalo Bills to the NFL play-offs for the first time since Bill Clinton was in the White House, footage inevitably went viral of Bills’ fans celebrating.

What was extraordinary about the YouTube clips of them whooping and hollering is how normal and routine and therefore out of step these were with the usual bizarre videos associated with hard-core followers of the club from upstate New York.

Ordinarily, a trawl through social media in search of Bills’ fans is an entertaining and disturbing trip through a highlight reel worthy of arguably the most demented fan-base in sport. There are numerous instances of drunken men whose pre-match revelries culminate in climbing onto the roofs of pick-up trucks and body-slamming unsuspecting picnic tables below to see if they will break.

Other delightful cameos include Bills’ die-hards having sex in the stadium car park, snorting lines of coke at half-time, and one especially unfortunate character setting himself on fire in yet another table-related stunt.

Add in clips of alcohol being imbibed from parts of the body where it was never meant to be located, and it seems, even by the traditionally outlandish standards of the NFL tailgate, a pre-game party zone not for the fainthearted or weak of stomach, Bills’ fans appear in a league of their own.

In the 18 years since they last made it to the play-offs, a group of supporters known as “The Bills Mafia” gained in notoriety, their hedonism often generating more national attention than their hapless players.

As the team struggled to get out from under the hegemony of the New England Patriots’ in the AFC East this century, Buffalo’s Ralph Wilson Stadium (The Ralph) became synonymous with a rather sybarite approach to match-day festivities.

Theories abound as to why they are such a madcap bunch. Located 400 miles from Manhattan, Buffalo is a blue-collar, rust-belt city that, like so many others across America, suffered severe setbacks in the post-industrial decades of the late 20th century. The kind of circumstances that led people to invest more hope than normal in their local team, perhaps, and to regard every fixture as a potential escape from reality.

Other explanations for their behaviour centre on the inclement weather. No NFL team plays in worse conditions more often than the Bills. No fan base (not even Green Bay) endures this kind of Arctic climate, with games in the second half of every season usually taking place in temperatures well below freezing, often accompanied by spectacular lake effect snow whirling in from nearby Lake Erie. Last month’s victory over the Indianapolis Colts took place in a full-scale blizzard that the obdurate supporters, of course, relished.

If socio-economic and climatic conditions offer clues as to why “The Bills Mafia” seek increasingly more troubling ways to amuse themselves, there’s also the club’s tortured history.

In their last play-off appearance in January, 2000, they were on the wrong end of a controversial Tennessee Titans’ touchdown that went down in history as “The Music City Miracle”. Before that, they lost four consecutive Super Bowls in the 1990s, the first of those an especially painful loss involving a potential winning field goal kick venturing a few inches “wide right”.

Farther back, the Bills’ most iconic player and face of the franchise in the 1970s was a running back named OJ Simpson. He broke all sorts of individual records and would be way more celebrated except, well, you know.

“I have been proverbially punched in the mouth as a fan more times than I should care to recall,” wrote Louis Sedia in a Sports Illustrated piece explaining his relationship with the Bills.

When the Bills were last up for sale in 2014, they came perilously close to being purchased by Donald Trump, then just a dodgy New York real estate developer with a tendency to exaggerate his wealth.

Missing out on Trump and avoiding the doomsday scenario of another consortium that wanted to move the club over the border to Toronto, they were bought instead by Terry and Kim Pegula. Owners of the city’s NHL team, the Sabres, the Pegulas are a couple with a vested interest in revitalising western New York state that goes way beyond sport.

That current incumbent Sean McDermott was the second head coach they appointed since taking over, and the seventh to take charge since 2001, speaks to the chaos that preceded the current campaign.

This is why it scarcely matters that most pundits reckon they will lose to the Jacksonville Jaguars in the AFC wildcard game on Sunday afternoon. The result really isn’t as important as the fact they will be there, in Florida, in the sun, playing knockout football instead of at home suffering the frozen tundra of another unforgiving Buffalo winter.

In the first 24 hours after he had ended the longest play-off drought in the NFL, Bills’ fans went online and donated $37,000 to Andy Dalton’s charitable foundation. A fair sum of money. A lot of broken tables.

1 Germany well ahead of the curve as Bundesliga gears up for return to action
2 US Masters 2019: Hole-by-hole guide to Augusta National
3 Woods and caddie `Fluff' break up
4 Nicholas Quinn: ‘Swimming became how I dealt with grief’
5 America at Large: Hurling fan Dowling leading the fight against Covid-19
Real news has value SUBSCRIBE