America at Large: Muhammad Ali and the Mormon senator 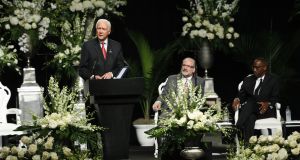 Senator Orrin Hatch speaks at the memorial service for Muhammad Ali after his death in 2016. Photo: Aaron P. Bernstein/Getty Images

Senator Orrin Hatch once invited Muhammad Ali to Salt Lake City to hear the Mormon Tabernacle Choir at the Church of Jesus Christ of Latter-day Saints. When the service ended, hundreds of Mormon worshippers lined up to meet the three-time champion of the world, seeking just to touch the hem of his garment. Always prepared, Ali handed every person who crossed his path a piece of paper bearing his signature. Upon closer inspection, the delighted fans discovered this memento was actually a leaflet cataloguing “Contradictions in the Bible” and promoting Islam. Nobody loved to tell that story more than Hatch.

The rather eclectic list of invited speakers at the funeral services for Ali in June, 2016 offered one more testament to the remarkable life he led. Aside from immediate family, the dramatis personae included former President Bill Clinton, comedian Billy Crystal, Malcom X’s daughter Attallah, a pair of rabbis, a Protestant minister, a Native American chief, a Buddhist monk, and Hatch, a devout Mormon and Republican senator from Utah. An ultra-conservative, right-wing politician, he took the mike in Louisville that day to eulogise the most famous/infamous American Muslim in history and, along the way, to explain how they became close.

“The friendship we developed was, I think, puzzling to many people, especially those who saw only our differences,” said Hatch. “But where others saw difference, Ali and I saw kinship. We were both dedicated to our families and deeply devoted to our faiths; he to Islam and I to the Church of Jesus Christ of Latter-day Saints. We were both products of humble backgrounds and hardscrabble youth…True, we were different in some ways, but our differences fortified our friendship; they did not define it. I saw greatness in Ali’s ability to look beyond the horizon of our differences to find common ground.”

The longest-serving Republican senator ever announced his retirement last week and, as the career retrospectives began, the 83-year-old’s unlikely relationship with Ali remains perhaps the most peculiar chapter of the four decades or so he’s spent in Washington. One day in 1988, the superannuated boxer simply arrived unannounced at Hatch’s office on Capitol Hill, thanked him for the part he’d played in securing a federal appointment for one of Ali’s friends, and confessed to being impressed with how the Senator spoke on television. From such odd beginnings, a bond somehow formed.

Within months, Ali was travelling to Utah to campaign for his new best pal. Hatch was running for re-election against a character named Brian Moss and, at one press conference, Ali announced his presence by roaring, “Tell Moss you’re the boss!” He also turned up at the Republican convention in New Orleans that year as Hatch’s personal guest, wearing a badge that read, “Bush in 88, Hatch in 96!”

Each seemed to relish day-tripping in the other’s world. Hatch flew to Las Vegas to hang with Ali and his entourage at big fights, enjoying in particular how some of the biggest athletes in the world would unceremoniously shove him out of the way merely to get inches closer to the champ. The one-time bishop in the Mormon church even took to wearing one of his friend’s championship rings on a chain around his neck (taking if off only after discovering that accepting such a lavish gift was an ethics violation).

“I like Orrin,” said Ali in an interview. “He’s a nice fella. He’s a capable man and he’s an honest man. And he fights for what he believes in.”

Some of his fans and, indeed, his close friends regarded Ali’s strange alliance with Hatch and his willingness to publicly endorse the elder Bush as a blatant betrayal of his principles and of the African-American community which had suffered unduly under Republican regimes. Others viewed his more ecumenical approach to politics rather differently, regarding it as just more evidence of his uniquely bipartisan approach to life as he aged and matured.

Certainly, the 1980s was a bizarre interlude in Ali’s life. For much of the decade, he came across as a character struggling to recapture the limelight and desperately searching for a higher purpose, an ill-fated quest that often left him vulnerable to the wiles of hangers-on bent on exploiting his name for commercial and other gains. Around the time he first met Hatch, Ali was under the spell of Richard Hirschfield, a sometime lawyer and a full-time hustler who was eventually exposed for pretending to be Ali while lobbying other influential Washington politicians over the phone.

In 1989, Hatch brought Ali to the West Wing to meet with Chase Untermeyer, President Bush’s director of personnel, about a possible gig in the administration. The senator wanted the new man in the White House to give his friend an ambassadorial role of sorts, maybe fronting a campaign to try to address the ills of urban America. Untermeyer listened to the pitch but was troubled by how silent Ali remained throughout the encounter, uniquely for him, letting somebody else do all the talking on his behalf. Nothing came of that but the friendship was unaffected by the setback.

In the last years of his struggle with Parkinson’s, when Ali could no longer speak, Hatch used to call his wife Lonnie for regular updates about his travails. An avid musician, he also wrote a song about his fistic friend titled, “The difference makes a difference”. With Ali, it always did.