Charles Barkley still nobody’s role model – except his own 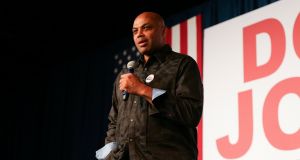 The night before Alabamans went to the polls to elect a new senator last week, Charles Barkley took the mic at a campaign rally for the Democratic Party candidate Doug Jones.

A native of the Birmingham suburb of Leeds, and arguably the greatest NBA player never to win a championship, Barkley made a very peculiar pitch to persuade voters to send Jones to Washington rather than Roy Moore, the Republican opponent and an alleged paedophile.

“At some point, we’ve got to stop looking like idiots to the nation,” he said. “I love Alabama, but we’ve got to draw a line in the sand. We’re not a bunch of damn idiots.”

When Jones subsequently pulled off his shock victory, Barkley received serious plaudits for his voluble contributions on the stump. The latest strange turn in a remarkable career that has regularly transcended sport and intersected with politics.

Nearly quarter of a century has passed since he provoked a national debate about athletes and their outsize place in children’s lives when, in an infamous Nike commercial, he declared, “I am not a role model. Just because I dunk a basketball doesn’t mean I should raise your kids.”

The perfect line for somebody who made his name as an abrasive, often controversial and regularly outspoken small forward, most notably, with the Philadelphia 76ers and Phoenix Suns.

During the US Dream Team’s 116-48 romp over Angola at the 1992 Olympics, Barkley was famously nearly ejected for elbowing a smaller, starstruck opponent, the facile nature of the contest failing to dilute his competitive nature.

Nicknamed “the round mound of rebound” for his chunky frame and his mastery of the backboards, that moniker morphed into “the round mound of sound” after he embarked on his post-playing career as the funniest, if not always the most perceptive, television analyst.

Witness his account of his mother’s reaction when he admitted being a Republican.

“Charles, Republicans are for the rich people,” she said.

Having made an estimated $50m as a player, he remains a highly marketable commodity today, his ongoing and often comic battle with the bulge led to a lucrative “Lose like a man!” campaign for Weightwatchers, a venture slightly undermined when he was caught live on air describing the deal as a scam.

The type of public misstep that might have undone somebody less charismatic, Barkley is one of those characters people seem willing to forgive most indiscretions. For instance, a drunk driving arrest where he claimed to be in a hurry to get oral sex from a female passenger in the car scarcely impacted his popularity at all.

That certain Teflon quality may be why he was often talked about in the past as a future Republican governor of his home state. Chatter that ended rather abruptly midway through George Bush’s second term when Barkley had an epiphany and declared a change of allegiance.

“I was a Republican,” he explained, “until they lost their minds.”

In those days, he was still one half of a formidable, almost legendary gambling and golfing duo alongside his good friend Michael Jordan, the tag team notorious for wagering epic sums at casinos across America. And when the world came crashing down around Tiger Woods in 2009, the pair of basketball icons were blamed by some for the debauched lifestyle he’d somehow kept concealed from the world. Whatever the truth of that allegation, Woods stopped talking to Barkley very soon after the golfer’s wife took a nine iron to him and his Cadillac Escalade.

Barkley’s longer-standing and deeper relationship with Jordan also foundered when the latter took offence at his friend’s onscreen criticisms of his mediocre record as owner of the Charlotte Hornets. Of course, the glaring difference between him and his erstwhile pals (aside from several degrees of wealth) is that Barkley has never employed a filter for commercial or other reasons. On television or on any platform he’s afforded, he’s willing to offer an opinion, even if it’s guaranteed to offend.

“When you are black, you have to deal with so much crap in your life from other black people. For some reason we are brainwashed to think, if you’re not a thug or an idiot, you’re not black enough. If you go to school, make good grades, speak intelligent, and don’t break the law, you’re not a good black person. It’s a dirty, dark secret in the black community.”

That kind of comment attracted as much opprobrium as praise, many resenting his willingness to criticise his own. Yet, his candour – he regularly highlights how lack of educational opportunities is holding back poor Americans, black and white – also explains why plenty were willing to heed his unorthodox electoral advice last week.

It helps too that he puts his money where his mouth is, responding to Jones’ win by immediately establishing a $1m fund for minority women in Alabama who want to start internet or tech businesses there.

“Yeah, we got a bunch of rednecks and a bunch of ignorant people,” said Barkley at the victory rally. “But we got some amazing people here and they rose up today.”

And then he announced he was off to get drunk to celebrate. Still nobody’s role model, except his own.