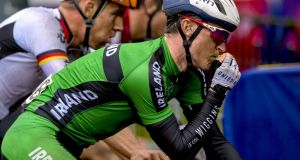 Ireland’s Matthew Teggart: he will be one of four Irishmen on the new UCI-registered team. Photograph: Craig Watson/Inpho

The blow to Irish cycling suffered by the ending of the An Post Chainreaction team at the close of the 2017 season plus the loss of the Aqua Blue Sport pro squad this August looks set to be offset by the creating of a new UCI squad for 2019.

Former professional Morgan Fox confirmed to The Irish Times on Thursday that a new UCI-registered squad will debut shortly. He and others are finalising a UCI application due midnight on Friday, and have already signed eight riders. These will include Irishmen Matthew Teggart, Daire Feeley, Aaron Kearney and the US-based Jelly Belly pro Cormac McGeough.

Those initial eight signings also include the Kiwi Mudgway, a former world junior track champion, the British Tour de Beauce runner-up Daniel Whitehouse, Australian Harry Sweeny and the Catalan Albert Muela Galvez. Several more signings will be finalised next week, including one of the most promising young Irish talents.

“We have some big names coming, including an international rider who could win 10 UCI races next year,” said Fox.

He said the Irish team has secured enough backing to run an international campaign in 2019, including Italian brands Guerciotti and FSA. For now it is operating under the EVO Pro title, but it is open to a title sponsor; if one is secured, this team name will change.

The plan is to compete as a Continental-level squad next season, the same level as the former An Post Chainreaction team, and to step up to the higher Pro Continental class for 2020.

Fox will be head sports director, with former Cycling Ireland president PJ Nolan to be the general manger. Irish-based Italian rider Matteo Cigala will be the performance director, overseeing coaching. The squad will also include the regarded Australian sport director John Dam and will be based in Girona, Catalunya.

The team comes at a crucial time for Irish cycling. An Post was involved for many years as a sponsor and the end of its backing led to the demise of the Sean Kelly team. When Aqua Blue Sport stopped at the end of August there was a danger that Ireland would have no UCI squad representation for the first time in over a decade but, fortunately, the new setup will avoid that problem.

While invites to races will expand over time as the team achieves success and builds a reputation, Fox said there was already a solid early programme in place. This includes the New Zealand Cycle Classic in January, the Herald Sun Tour, the Mallorca Challenge and the Tour of Murcia.

Should the Rás Tailteann organisers secure the necessary backing to run the event in 2019, it will be a key target for the squad, and would give its Irish riders a platform to shine on home soil.