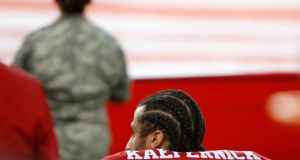 Colin Kaepernick was the best option on the market but Washington still were not interested. Photograph: Robert Reiners/Getty Images

Colin Kaepernick will never play in the NFL again, that much was made clear this week. Washington’s decision to sign the lightweight talents of Mark Sanchez and Josh Johnson over Kaepernick, a week after claiming Reuben Foster – a man arrested twice in the last year for domestic violence – on waivers and announcing to the world that it was prioritising winning football games above all else, is as shameful as it is predictable.

Washington plucked Johnson, who last threw a pass in the NFL in 2011, out of obscurity this week to back up Sanchez after Colt McCoy’s season ended with a broken fibula. McCoy previously replaced Alex Smith, who is out for the season with a broken leg suffered in Week 11.

Kaepernick was the best option on the market when each of Smith and McCoy went down. Yet Washington, who are pushing for the playoffs (or were pushing for the playoffs) barely entertained the idea of signing the most qualified quarterback free-agent in football. “He’s been talked about and discussed,” head coach Jay Gruden said this week. “But we will probably go a different direction."

Now the reins have been handed to Sanchez, a player more infamous for running into a rear-end than any throw he ever made. There’s no comparison between Sanchez and Kaepernick: one is a fringe roster member; the other is a league-average starter. Sanchez has thrown 86 touchdowns to 87 interceptions in his career, while Kaepernick has 72 touchdowns to 30 interceptions, not to mention the additional 13 rushing touchdowns while averaging 6.1 yards per rushing attempt.

The league’s teams aren’t even trying to hide it anymore, not that their previous attempts were all that convincing. Kaepernick has been excommunicated because of his political beliefs and his protest, while the likes of Foster and Kareem Hunt hung out on rosters until their sins were too obvious to the public.

You’ve heard all of the rickety arguments regarding Kaepernick’s employment status at this point. But the vacancies in Washington make them worth dissecting one more time.

1) Teams won’t sign Kaepernick because he’s suing the league. True, and that probably makes things a little tricky for owners. But so is Eric Reid, who’s currently flying all over the Panthers secondary. And so did Tom Brady amid the Deflategate nonsense. Shockingly, both of those guys retained or found employment.

2) He’s not actually that good. An argument typically accompanied by cherry-picking a small sample size, like Kaepernick’s final year in San Francisco where the roster was bereft of talent and Chip Kelly was literally tipping his plays to any coaching staff that was paying attention. Since Kaepernick became a starter with the Niners his touchdown to interception ratio ranks eighth overall in the NFL at 2.4, a number that puts him directly behind Drew Brees and Peyton Manning. Not bad.

Kaepernick is also tied for first in interception percentage (1.4 per cent) since he entered the league. In a league that detests turnovers – that will gladly bench a running back for the remainder of the game for a fumble – teams are overlooking a quarterback with fewer giveaways than anyone since 2011. It’s not as though he’s overly conservative, either: the game film shows that. But if you want some stats: he’s averaged 7.3 air yards per attempt in his career. By comparison, Sanchez has averaged 6.69, Johnson 3.9.

3) His early production was propped up by others. Nobody, at least not this writer, is arguing Kaepernick is a transcendent talent. To do so is as intellectually dishonest as claiming he stinks. Kaepernick thrived with the 49ers when playing on a team with a bulldozing offensive line, a (probable) Hall of Famer in the backfield, and a defense loaded with the kind of talent that comes together once in a generation. But they didn’t carry Kaepernick: he elevated the run game with his legs, which in turn helped open the passing game.

You can count on one hand the number of quarterbacks who can raise the level of everyone around them, and Kaepernick isn’t one of them. But neither is Matthew Stafford, Cam Newton, or Kirk Cousins (as much as that pains me to admit about three of my quarterback man crushes), and all three are making more than $15m to throw footballs this year.

4) He hasn’t played in two years, let it go. Sanchez hasn’t attempted 100 passes in a season since 2014 and hasn’t thrown a touchdown pass since 2015. Johnson last threw a regular-season pass in 2011. Uber wasn’t even a thing then. Donald Trump was just the guy on The Apprentice with funny hair.

5) He doesn’t fit the system. That was a nice crutch at some stops. But not this one, not this time. Gruden’s offense, whether marshaled by Kirk Cousins or Alex Smith, has run a bunch of the stuff Jim Harbaugh ran with Kaepernick in San Francisco.

6) Does he even want to play? Report, after report, after report, including one this past week, have confirmed Kaepernick’s desire to suit up in the NFL again. If anything, one could argue that it would be easier at this point for Kaepernick to not attempt to get back into the league. He would go down as a martyr among his supporters, without having to sustain the physical and emotional pain of hopping onto a mediocre or bad team. Doubters wouldn’t even get the chance to play the told-you-so card.

Yet he still wants back in. He will never get that shot. The reality is Kaepernick remains unsigned due to political reasons. Either individual owners or decision-makers disagree with his views, or they’re fearful of the backlash from the Commander in Chief and the league’s conservative consumer base.

But isn’t the point of being the biggest, baddest sports league in the country that you can do what you want, whenever you want? And Washington have made risky moves before. Foster remains under investigation for domestic violence but team president Bruce Allen and owner Daniel Snyder don’t care. Just like they didn’t care when they used alcoholism as a reason to fire former general manager Scot McCloughan, despite knowing his well-publicised issues when they hired him; or when Snyder continues to insist Washington’s nickname respects Native Americans; or when the team are accused of allowing unsavory things to be done to their cheerleaders for the enjoyment of male sponsors and suite holders.

It’s not as if other teams have given the cold shoulder to protesting players, either. Kenny Stills, Eric Reid and others who supported Kaepernick’s cause remain employed, but Washington have drawn the line at this one player. And the strawman arguments against Kaepernick crumble under any kind of scrutiny. Rather than remain competitive, Washington opted to throw their season away over politics. In doing so, they confirmed themselves as the league’s most shameless, embarrassing franchise.