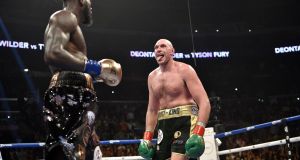 When Tyson Fury got up from the canvas to finish like a wounded bull in the 12th round of his achingly unfair draw with Deontay Wilder in a faraway ring, he not only moved alongside his shocked opponent and Anthony Joshua as an unbeaten claimant to heavyweight supremacy. He single-handedly made the struggle with gloves a very human experience again. That makes him genuine box-office.

Fury is no Muhammad Ali, but he revives memories of that era when charisma had a believable link to its classical roots: “a divinely conferred power or talent”, as the Oxford English Dictionary puts it. Pointing to the skies, Fury said later his belief in God was what made him rise from semi-consciousness and batter Wilder all the way to the final bell, securing his place at the top of the division with the previously awed American, and Joshua.

Their differences in style and personality are marked, and that will invigorate the fight game over the next couple of years, at least. But the man of the moment, boxing’s original travelling man, is the one who cares least about the riches his sport can bring. Fury has something the other two do not: an earthy disregard for convention, manners, sensitivities and history.

His edgy, irreverent persona separate him from his more conventional rivals – gold for the marketing men – and his troubled backstory of mental illness and addiction invite admiration and sympathy from an audience beyond boxing.

True to his roots, Fury says he is happy to take his growing army of supporters to Las Vegas next spring to challenge Wilder again – although there is a chance the rematch will be at Wembley instead, shortly before Joshua’s scheduled return to that stadium.

Fury and Wilder kept their records clean after fighting to a draw in Los Angeles on Saturday night for the American’s WBC version of the heavyweight title and Fury’s “lineal” claim, and that alone persuades the Mancunian’s promoter, Frank Warren, to believe Wilder’s connections would consider all options.

“I think it’s got a good chance of coming to London,” Warren told the BBC on Monday. “You’d have a 90,000 gate at Wembley, so you’re talking serious money. But with Tyson, he’ll travel. He’ll go where the money is, for March, April.”

Eddie Hearn has already booked Wembley for 13 April in anticipation of Joshua defending one or more of the three heavyweight titles he owns, against Dillian Whyte if the south Londoner beats Dereck Chisora at the O2 Arena on 22 December.

Those are the shifting parameters in an equation that a year ago looked to have only one defining high-point: Wilder coming to London in the summer of 2019 to fight Joshua for all four heavyweight belts. Now, negotiations become complicated.

Joshua and Hearn said no to a £50m fight with Wilder (according to Hearn’s father, Barry), because they did not believe in the Alabama man’s drawing power, or trust that the American backers would come up with that much guaranteed money. Fury and Warren thought otherwise – which, given it was their quickest if most dangerous route to the top, made some sense.

The purses announced by the Californian authorities said Wilder would get $3m (€2.6m) and Fury $2m (€1.7m), but that did not account for all the ancillary deals each fighter’s team conducted with Showtime and BT Sport. Whatever the final pot, it was big enough for Fury to say he would give a large part of his stake to the homeless.

On his return to London on Monday, Warren could barely contain his glee. “They said he wasn’t going to sell any tickets,” he said. “They said it wouldn’t go ahead – well it did go ahead, didn’t it? They said it was going to be a boring fight. It was one of the most exciting fights – certainly the most exciting I’ve seen at heavyweight in America since Lennox Lewis-Vitali Klitschko [IN 2003]. I’ve worked with Mike Tyson, Frank Bruno, all of those. Now, Fury’s the people’s champion.”

The United States has witnessed few heavyweight fights of consequence or high-quality drama in recent years, although Danny Williams’s stoppage of a war-weary Mike Tyson in 2004 thrilled for the four rounds it lasted. This, though, had more legitimacy. Fury delivered what he promised, an upset – maybe not in the same way that Ali “shook up the world” to dethrone another knockout ogre, Sonny Liston in 1963, but in his own idiosyncratic way.

That is what intrigues about Fury. While he sickened Wilder more than once with the weight of his measured head shots, he is not a devastating puncher. Nor is he a dancing artist, although he moves well for a 6ft 9in heavyweight, as he pointed out.

He is a schooled, intelligent boxer, the antithesis of his other self, the agent provocateur who generates anarchy and controversy. And, like Ali, he backs himself to do things that are extraordinary.

1 Gerry Thornley: After 32 weeks the Six Nations is back up for grabs
2 Stockdale and Ringrose on board with expansive Irish game plan
3 The Offload: Spectre of doping hangs heavy over South African rugby
4 GAA expected to go ahead with championship under Level 5
5 Castrogiovanni remembers ‘beautiful battles’ with Ireland
Real news has value SUBSCRIBE