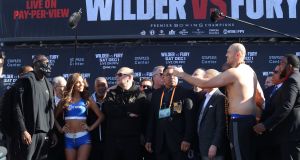 Deontay Wilder and Tyron Fury at the weigh-in in LA. Photograph: Tom Hogan/Inpho

Tyson Fury and Deontay Wilder could be destined for an immediate rematch regardless of the outcome of their WBC heavyweight title fight.

The rivals finally fight on Saturday evening at Los Angeles’ Staples Center and, unusually, both fighters have rematch clauses in the event of their first professional defeat.

While the most common circumstances are for the defending champion, in this case Wilder, to have such an option, it has also been extended to the 30-year-old Fury, who had not planned such a dangerous fight so soon into his comeback and who is still regarded by some as the division’s lineal champion.

It is even likely that a London football stadium, like where Anthony Joshua has established himself as the IBF, WBA and WBO champion, would be considered as the venue for a potential rematch in the spring.

Both fighters have again this week been critical of Joshua for, in their view, being unwilling to risk bouts against either of them, and also discussed their willingness to fight each other in a rematch.

Also considering the potential for a rematch, Fury’s promoter Frank Warren said: “It’s a great fight and if it turns out as I expect I’m sure there’ll be a rematch.

“I would love it to be in London; if it’s a good fight straight into a soccer stadium.

“If Wilder loses he’d have to make a statement. Tyson would fight anywhere; he’s a traveller, he’s done it many times.

“I don’t think Wilder wanted to come to London, that’s why Tyson (travelled).

“Tyson will fight in the UK again.”