How Muhammad Ali’s hostage negotiating led to an unlikely friendship 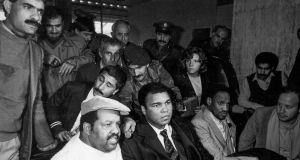 Ali in Beirut in 1985 after he was sent to help secure the release of US prisoners. Photo: Arnaud Borrel/Gamma-Rapho via Getty Images

At two o’clock on a February morning in West Beirut, Muhammad Ali and his entourage stood outside the Summerland Hotel, a place so war-torn by 1985 that its manager boasted every mirror and window had been shattered at least once by bullets or shells.

A pair of battered Mercedes driven by men wearing Keffiyehs and toting Kalashnikovs pulled up and opened their doors. As had been arranged. After the convoy negotiated its way past the first heavily fortified checkpoint, there was another stop so everybody could transfer to a Volkswagen bus and a Chevy for the next leg of their journey into the Lebanese night.

Ali and his fellow travellers kept waiting for blindfolds that never came and, eventually, the cars stopped outside a dimly-lit, shabby villa. At the door, a friendly man welcomed them with glasses of juice and a plate of dates, and invited them to sit.

His name was Ibrahim Al-Amin and, days earlier, at the al-Ouzai Mosque in the city, he had read out a document proclaiming the existence of Hezbollah to the world and outlining its manifesto. Among the aims of a group backed and funded by Iran were the obliteration of Israel and a promise “to expel all Americans and their allies from Lebanon, putting an end to any colonialist entity on our land”.

Oblivious to the disturbing realpolitik, the most famous American on earth sat across from Al-Amin, the new face of Shia fundamentalism, and argued for the release of four of his compatriots then being held hostage in south Lebanon. Al-Amin feigned ignorance about the plight of the quartet but, contradicting himself, he also assured Ali their liberty might be possible if the former boxer could secure the release of several hundred Palestinians being held in Israeli prisons.

He even handed over a list of names to make it easier to plead their case. A ridiculous ask, that didn’t stop Ali turning up in Tel Aviv four months later requesting the “freeing of his Muslim brothers” from Atlit detention camp.

A trip to the most dangerous city on earth – a daily ceasefire existed in Beirut until midday so women could get home safely from the markets – and a bit-part in the Middle Eastern morass, had been suggested to Ali by a most unlikely source.

Months earlier, during a visit to Ronald Reagan at the White House, the former boxer and his entourage had been deliberately waylaid in the West Wing by vice-president George HW Bush and, according to Larry Kolb, Ali’s friend and adviser, the former director of the CIA made a very specific request of the three-time heavyweight champion.

“We’d like you to use your status as a respected Muslim to enter into a secret dialogue with the Ayatollah Khomeini to try to procure the release of the American hostages held in Beirut,” said Bush. “This will have to be done without any trace of White House support.”

In the week when Bush underwent the ridiculous posthumous apotheosis afforded too many political leaders, his relationship with Ali remains a curious interlude.

They certainly made for an odd pair of bedfellows, the patrician blue blood who enlisted in the US Navy on his 18th birthday and the most conscientious of all the objectors to the Vietnam War.

That was certainly what many aghast Ali fans thought when their hero fetched up at the 1988 Republican National Convention, sitting behind Barbara Bush, wearing a badge endorsing her husband as the man to succeed Reagan.

Many leaders of the African-American community wondered aloud whether this represented evidence their man was, indeed, punch-drunk.

His time under the spell of Republicanism almost culminated in Ali taking a job with the Bush administration the following year. Briefly considered for a role as the point man for a campaign designed to address the many ills confronting urban America, Chase Untermeyer, Bush’s chief of staff, was unimpressed by Ali’s lengthy silences during an informal sit-down about the role.

Relations between the superannuated fighter and that White House deteriorated further when he got caught in the cross fire between the 41st president and Saddam Hussein in the build-up to the first Iraq War.

After Hussein began deploying foreigners as human shields against potential missile attacks, Ali offered to use his peculiar brand of sporting diplomacy to try and bring home some Americans being held there. Bush and his cabinet freaked out at the very suggestion, accusing him of allowing himself to be used as a propaganda tool by the Iraqis.

Ignoring public criticism from the man who clandestinely sent him into harm’s way in Beirut, and eschewing warnings he was putting himself at risk of being taken prisoner, Ali flew to Baghdad in November, 1990.

While Hussein prevaricated on a proposed meeting between the pair, Ali ran out of his Parkinson’s medication and appeared in no condition to conduct any sort of negotiation.

By the time he was granted an audience with the Iraqi president, doctors at the city’s Irish hospital had got him the prescription he needed, and after a productive 50-minute discussion, Hussein announced, “I’m not going to let Muhammad Ali return to the US without having a number of American citizens accompanying him.”

Ali landed back in JFK with 15 hostages and a renewed belief talks might work. By then, of course, his old pal president Bush had persuaded the United Nations Security Council to authorise him waging war.