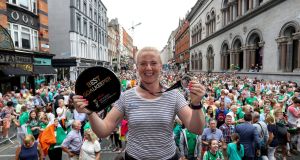 Ireland’s Ayeisha McFerran with her award for best goalkeeper at the World Cup. Photo: Tommy Dickson/Inpho

Irish goalkeeper Ayeisha McFerran has added yet another individual honour to her 2018 collection, the University of Louisville student named on the All-American team of the year for the fourth year running.

McFerran, who was voted goalkeeper of the tournament at the World Cup during the summer when Ireland reached the final, becomes the first player in Louisville’s history to earn four All-America awards after another outstanding season for the team.

The 22-year-old from Larne is in her final year at the university and is due to graduate next May with a degree in Exercise Science. She will be a key member of the Irish team in 2019 as they begin their quest to qualify for the 2020 Olympics, starting with an FIH Series event in Dublin in June where a top two finish will be required to advance to the final Olympic qualifying event which will take place in November of next year.

1 Ireland 23 Georgia 10: How the Irish players rated
2 Ireland’s autumn of discontent continues with abysmal Georgia showing
3 No fireworks but Limerick get the job done against Galway
4 Jim McGuinness: There is a way to save championship and make it competitive
5 Ireland grind their way to grisly win over Georgia
Real news has value SUBSCRIBE