Hockey: Ireland can finish off England to stay in World Cup 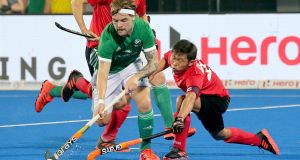 Alan Sothern of Ireland in the match against China. Photograph: Harish Tyagi/EPA

The positive aspect of Ireland’s 1-1 draw with China in their last pool game of the men’s Hockey World Cup is that the team created chances. The downside is that despite half a dozen or so circle penetrations along the back line, Ireland failed to find a green stick or a Chinese foot for a penalty corner.

There was almost a lack of cynicism or savvy to manufacture set-pieces, which leaves the team in a semi-precarious position against England. It is a position Ireland are not unused to being in.

A draw with England in Kalinga Stadium in India in the last match of the pool would be enough to see Ireland through into a play-off for a place in the World Cup quarter-finals.

Prior to the tournament beginning, the straws in the wind had already pointed to a showdown against England in the final pool match. In that, Ireland have succeeded in that they are alive in the tournament and need just to draw.

The Irish karma might be that the silver medal-winning Irish women’s team also played England in the last match of their pool at the summer World Cup in London. Ireland lost that match 1-0, but the work had already been done and Graham Shaw’s team went on to the final.

The world rankings of the teams in this match won’t have any bearing at all. England has the higher rank of No 7 in the world to Ireland’s No 10. Bear in mind the Irish women went into London ranked 16th in the world.

Captain David Harte has been strong in goal since the beginning and Ireland need that form to continue. So too have the defence been tight. Largely the tackling has been clean, with only one yellow card so far.

There is considerable intelligence both ways. Ireland famously beat England 4-2 to win a first ever bronze medal at the 2015 European Championships, and again they will not be troubled about getting up for this one.

But Cox and former coach Craig Fulton before him have brought control and organisation to the team, and with many of the side playing professionally around Europe, conditioning is not a factor.

In Eugene Magee, Ireland have an abrasive forward presence, and Alan Sothern and Shane O’Donoghue usually know where the net is, Sothern scoring last time out against the Chinese from a ripped cross that would have hit many forwards on the foot. He was incredibly nimble to get his body out of the way and angle his stick on the ball.

England last won the World Cup in 1986 but are far from that level now. They have, though, come fourth in the previous two events.

Cox and the Irish players know the finishing was poor against China. With even half the amount of chances this time out, there should be a better return. The Irish defence is stronger than England’s. Finish better and Ireland will win.

1 David Clifford sends everyone back to their corners unbeaten
2 Six Nations: Ireland are contenders but England still the team to beat
3 Mike Catt hopes to have Irish backs purring in Six Nations
4 In Donegal Michael Murphy is seen, simply, as a godsend
5 Jürgen Klopp insists Liverpool title party is not on his mind
Real news has value SUBSCRIBE