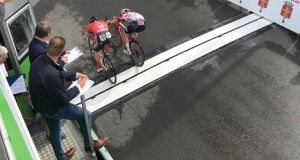 Having achieved his goal of claiming a third stage win in the BinckBank Tour on Wednesday, Sam Bennett had a much tougher day on the difficult terrain of stage four on Thursday.

The 96 kilometre stage in and around Houffalize was marked by a strong breakaway group, out of which the Belgian Tim Wellens (Lotto Soudal) grabbed the win. He beat Swiss rider Marc Hirschi (Team Sunweb) to the line, with another Belgian Laurens De Plus (Team Jumbo-Visma) five seconds back in third.

Four other riders came in just over 20 seconds back, while the main bunch was led in by the Dane Søren Kragh Andersen (Team Sunweb), 33 seconds behind Wellens. Bennett was over 15 minutes back. He slipped from first to 77nd overall. However his main goal is the upcoming Vuelta a España and, with three stage wins to his credit, relinquishing race leadership will remove pressure in advance of the Spanish Grand Tour.

Bennett is a clear leader in the points classification. His tally of 90 points is a full 24 ahead of his closest rival Jasper Philipsen (UAE Team Emirates).

Bora hansgrohe sports director Jens Zemke said after the stage that the team had hoped to put another rider in the top ten overall, but that this didn’t work out.

“However, we can we more than satisfied with the three stage wins which we achieved so far, and the fact that Sam Bennett still leads the points classification.”

The race continues on Friday with a far flatter 191.4 kilometre race to Venray. Another bunch sprint is likely, giving Bennett the chance to chase what would be an incredible fourth stage win out of five.

The race runs until Sunday, after which Bennett will head to Spain in advance of the Vuelta. That begins in Torrevieja on Saturday week. The Carrick-on-Suir rider will make his debut in the event and will hope to emulate his success in last year’s Giro d’Italia, where he nabbed three stage victories.

Nicolas Roche (Team Sunweb) will also line out in the event, one of his favourite races of the season. He rode aggressively in the Tour de France, with a best placing of sixth on stage nine. Roche has clocked up two Vuelta stage wins in the past and will be aiming to add to that tally.

Meanwhile Lara Gillespie will aim for gold in the individual pursuit and points race in the Junior World Track Championships in Frankfurt on Saturday. She had bad luck on Wednesday, falling in the women’s scratch race, but was fortunately not badly hurt.