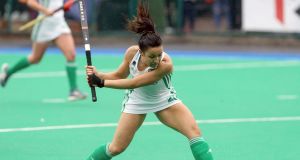 Anna O’Flanagan: “It was important that we put it [the World Cup] to rest, we couldn’t keep dwelling on it, it wasn’t going to get us to where we wanted to go”. Photograph: Bryan Keane/Inpho

If Anna O’Flanagan had acquired any notions about her sporting self, having been part of the Irish hockey squad that won silver at the World Cup last summer, she was hastily returned to earth as soon as she got back to club duty with Pinoke in the Netherlands.

“Because when you go back to Holland after you’ve come second in a World Cup, they don’t really care,” she laughed, the shrug confirming that for the Dutch first is first, second is abject failure.

Such are the standards the aristocrats of hockey have set for themselves, but for Ireland reaching the final against the Netherlands in London was the stuff of dreams, the celebrations that followed, accompanied by the unprecedented attention the players received, making for a magical spell in their lives.

It was at the turn of the year, though, that the squad decided it was time to “park” their World Cup achievements and move on. As O’Flanagan put it, “it was important that we put it to rest, we couldn’t keep dwelling on it, it wasn’t going to get us to where we wanted to go”.

And ultimately where they want to go is Tokyo next summer for the Olympic Games, and while they succeeded in the first phase of their qualification-seeking journey by reaching the final of the FIH Series event in Banbridge back in June, where they lost to Korea, things now shift up a gear or two for the squad in the weeks ahead.

On Sunday, they open their European Championships campaign with a pool game against England in Antwerp, Belarus their opponents on Monday before they take on Germany on Wednesday. The Dutch, Spain, hosts Belgium and Russia make up Pool A, with the top two in each group advancing to the semi-finals. The pools’ bottom two teams will enter a four-way battle to avoid relegation, two nations falling in to the second division of European hockey.

Ireland have never finished higher than fifth in the Europeans, the last time they achieved the feat a decade ago, and as the fifth-ranked nation out of the eight competitors in Antwerp, they won’t be expected to make the last four this time around either.

But out of the 16 teams that qualified for the 2018 World Cup, only one (Italy) was ranked lower than Ireland, so the challenge is to exceed expectations once more.

The prize for winning the Europeans is that much cherished qualifying spot for the Olympics Games, the Dutch, defending champions, who have won nine of the 13 tournaments played so far, are the favourites to seal it.

But it’s not quite a case of all or nothing. World ranking points are also up for grabs, and the higher your placing the greater the chance of a home draw and a pairing with one of the lower ranked nations in the two-leg Olympic qualifiers that Ireland will find themselves in come late October/early November.

While the Olympic qualifying process can make the theory of relativity seem like a cinch to comprehend, as of now China (ranked 11 in the world), Korea (12), the United States (13) and Canada (18) make up the list of potential opponents in that play-off for Ireland who rose to eighth in the rankings after the World Cup.

And having come so close to making it to the Olympics on the last two occasions, qualifying for Tokyo has been the number one goal of this squad since they missed out on Rio, O’Flanagan describing the World Cup, spectacular as the experience was, merely as “a stepping stone” on that journey.

Since then the Dubliner has opted to return home from the Netherlands for her club hockey and, once her 2019 international duties are done, will take up the role of assistant coach, as well as player, with Muckross.

Irish captain Katie Mullan made a similar decision when she decided to become player-coach at Ballymoney rather than extend her stay with Club an der Alster in Germany.

It’s a significant boost to the domestic game to have two of the Irish team’s stalwarts back on home turf and moving in to coaching, but the demands between now and the end of the Olympic qualifying process, when the squad will be in training camps from Sunday to Tuesday each week, made it difficult to commit to clubs where they would be playing on a semi-professional basis.

Goalkeeper Ayeisha McFerran, though, will be playing her club hockey next season with Kampong in the Netherlands having finished her four-year spell at the University of Louisville, a move welcomed by Irish coach Sean Dancer.

“It’s a fantastic opportunity for Ayeisha because the Dutch league is the world’s best,” he said, McFerran having earned her contract with the club with her outstanding displays at the World Cup.

She, O’Flanagan and Mullen remain key players in Dancer’s plans, the Australian, for whom the Europeans will be his first tournament in charge of Ireland, staying largely loyal to the squad his predecessor Graham Shaw brought to London last summer, retaining 15 of the 18 players.

Since then Ulster youngster Bethany Barr and Railway Union’s Sarah Hawkshaw have forced their way in to the squad, with McFerran’s understudy now Liz Murphy, Grace O’Flanagan no longer available due to work commitments.

It is, then, an experienced squad that has already proved to itself that it is capable of mixing it with higher ranked nations on any given day, although if they play to form England and Germany should prove too strong for Ireland in their European pool and will be favourites to reach the semi-finals.

But no more than the World Cup, the Europeans will be a stepping stone too, even if the goal will be to better that previous best of a fifth-place finish. Once that tournament concludes, all eyes will be on next month’s draw which will determine which nation stands between Ireland and qualification for the Olympic Games. The ultimate goal.