Sailing: Women at the Helm regatta a welcome initiative 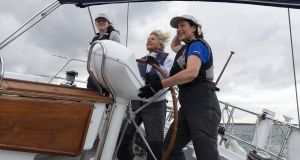 Dara Donnelly with Jean Mitton and Angela Heath preparing for ‘Women at the Helm’. Hosted by Irish Sailing, the inaugural Pathfinder Women at the Helm Regatta takes place this weekend at the National Yacht Club in Dun Laoghaire, Co Dublin. Photograph: David Branigan/Oceansport

A glance at the line-up of sailors and events for next summer’s Tokyo Olympics offers a glimpse of the future idyll for the sport of sailing: equal numbers of male and female athletes on the water.

The events selected for Irish Sailing’s performance programme happens to neatly follow this ambition by limiting itself to four of the ten disciplines with balance between the genders comprising the men and women’s alternatives of the single-handed and skiff dinghies.

But closer scrutiny of the sport from grassroots level all the way up to professionally-crewed big boats reveals huge imbalance towards a male-dominated sport at adult level.

This weekend features an initiative to address the issue at the heart of women’s participation in sailing. And for the record, it isn’t down to male-only yacht club rules; those sort of restrictions were disposed of decades ago in this country.

The Irish Sailing Pathfinder Women at the Helm regatta aims to overcome typical barriers that many women encounter by staging a weekend of female-led racing hosted by the National Yacht Club.

More than 100 participants are expected for the inaugural event that will be sailed in boats ranging from single-handed Lasers up to fully-crewed cruiser-racers.

Men aren’t excluded but the boats must be skippered and helmed by women. Easy enough for the single-handers but with big-boat ownership massively dominated by men, access to boats is one of the major challenges.

“From my own perspective, I started sailing at age 39 and I found it very daunting in a male-dominated sport,” said Sarah Byrne, an Irish Sailing board member who acknowledges the support of the boat-owning men that have readily loaned their boats for this weekend’s event.

But the format of an event aimed specifically at women is not finding universal approval, ironically from some women already actively involved.

“People already fully integrated in the sport scoff at this [regatta] but it does make a difference,” added Byrne.

Byrne highlights the Volvo Ocean Race (now The Ocean Race) initiative as a success whereby boats that didn’t have women on the crew were penalised by sailing with fewer crew. However, gender quotas are generally are regarded as contentious.

“We feel that forcing it [change] on people is not the answer,” says Byrne who also points to more fundamental challenges for women to consider.

“As women, we limit ourselves and we need to push back against that; women are less inclined to follow their own instincts and just do it,” she says. “This is about building confidence and overcoming perceived barriers.”

Among the participants for the event will be Dún Laoghaire sailor Angela Heath who competed with Tracy Edwards and the first all-female crew in the Whitbread Round the World Race 30 years ago becoming the first Irish woman to race around the world.

Heath will lead a mixed crew for the regatta and will also feature in Maiden – The Movie that will be shown at the National YC and recounts the story of that ground-breaking race in 1989.