Calves Week brings high-quality fleet, but they’re not having it all their own way 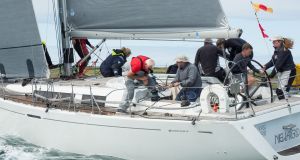 The winner of the opening race of this week’s 2019 Calves Week at Schull in West Cork was the Grand Soleil 40 Neulargo (Denis Murphy) from Royal Cork. Photograph: Bob Bateman

Calves Week has yet again produced a high-quality 62-boat fleet in six classes for this week’s West Cork festival of sailing that includes some of the leading east coast contenders for the Irish Cruiser Racing Association’s Boat of the Year award, and they are not having it all their own way on Roaringwater Bay.

After two races sailed in strong breezes, Denis Murphy’s Grand Soleil Neulargo from Royal Cork leads a 10-boat Class Zero/One, but clubmate Brian Jones in the J109 Jelly Baby had an excellent second day with two race wins. With all results still to be officially tallied, it looks like south coast boats have edged ahead of Greystones’ Sovereign’s Cup victor Eleuthera (Frank Whelan’s Grand Soleil 44) and June’s Dún Laoghaire Dingle winner, the JPK 10.80 Rockabill VI of Paul O’Higgins. With Thursday’s race to the Fastnet Rock to be added into the scoresheet – plus a strong wind forecast that could yet cut the series short – the overall trophy is still very much up for grabs.

The 2019 Rolex Fastnet Race has been won by David and Peter Askew’s 21.5-metre (70ft) Wizard. The announcement was made by the race organisers, the Royal Ocean Racing Club, on Wednesday even when many of the 390-boat fleet were still at sea, but it became clear that the Volvo 70 could not be beaten. Wizard is the first American yacht to win the race overall since Great News in 1989 and, before that, Tenacious, in the infamous race of 1979.

All the main prizes in this year’s record-breaking edition of the Fastnet Race have gone abroad, either across the Channel or across the Atlantic, with the French mopping up most of the other divisions. Ireland’s own efforts were finally sunk on Thursday when Rónán Ó Suichrú in an Irish Offshore Sailing School entry was beaten in the Roger Justice Trophy race (for best sailing school entry) by a British rival.

Father-and-son duo Peter and Stephen Boyle from Sutton Dinghy Club are relishing the heavy airs at Abersoch this week and sitting as top Irish boat in seventh overall in the 56-boat GP14 UK Nationals fleet. Ten Irish are contesting the North Wales event. Also at the Championships, Curly Morris (75) of East Antrim Boat Club in Larne was elected as president of the International class. The GP14 Ireland stalwart has given international service as a member of World Sailing’s Classes Committee, thanks to his beneficial experience of the lively National Association here.

Gordon Patterson and Ross Nolan from Royal North of Ireland Yacht Club won the Squib Irish Nationals on its 50th anniversary last weekend. Coincidentally, their winning boat, Fagan, was also 50 years old the same weekend. In the build-up to the title victory, the Belfast Lough crew also won the Inlands, Northerns, Easterns and the Squib Southerns this season.

A top-five finish for Royal Cork’s Cillian Foster in the 5.3 division was the best of several strong results for Irish youth sailors at the Topper Worlds in Medemblik, Netherlands last weekend.

Also from Royal Cork’s youth divisions, Harry Durcan and Harry Twomey finished ninth overall at the 29er World Championships in Poland, which drew to a close this week, scoring Ireland’s best result ever in the competition.

There were also jubilant scenes at Royal Cork Yacht Club last weekend when Foynes Yacht Club triplets Darragh, Noel and Mark McCormack lifted the National Championship trophy. The brothers successfully defended their title on the last day, coming from third overall with two races left to sail in the 10-race series. It was a far happier conclusion to the event than its beginning when one of the 18ft clinker craft was damaged in transport to Crosshaven.