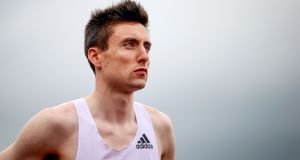 Ireland’s Mark English pulled out of the 800m at the Cork City Sports. Photo: Tommy Dickson/Inpho

Mark English appears to be fast running out of time to qualify for next month’s World Athletics Championships in Doha, Qatar after dropping out of a competitive 800 metres at the 68th Cork City Sports at the CIT track.

English, who won European Indoor bronze in Glasgow back in March, has a best of 1:46.96 this season, and at age 26 is looking to make his fourth successive World Championships, the standard for Doha set at 1:45.80.

However something clearly wasn’t right here: although looking comfortable at the bell, sitting in fourth, English suddenly faded down the backstretch, and stepped off the track with 200m remaining.

Of class interest in the field events was Luvo Manyonga, the reigning long jump World champion from London 2017, who has a lifetime best of 8.65 metres, and his season has jumped 8.37m.

Manyonga was also using the Cork event as part of his preparations for Doha, having won gold in London after one of the most remarkable comebacks in modern sport, overcoming a drug addiction in his native South Africa. He duly delivered here, winning with a new stadium record of 8.20m

Phil Healy, still coming back to her best after an early-season injury, finished fourth in a high class 100m, won by the rising American star Candace Hill in 11.37, Healy clocking 11.49.

Sommer Lecky finished fifth in the high jump with a best of 1.80m, while Nadia Power continued her fine season when clocking 2:03.19 to finish fifth in the women’s 800m, with Leon Reid also getting up third in the men’s 200m, running 20.89.