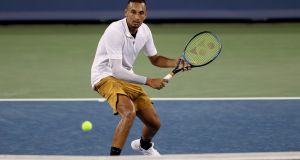 The ATP has fined Nick Kyrgios a total of $113,000 (€102,000) following his second-round loss at the Cincinnati Masters on Wednesday, when the Australian argued loudly with Irish chair umpire Fergus Murphy and smashed several rackets.

“In addition to the on-site fines, the ATP is looking further into what happened during and immediately after the match to see if additional action is warranted,” the governing body said in a statement. “That could result in an additional fine and/or suspension.”

Kyrgios clashed with Murphy in the second set of the night match against Russian Karen Khachanov.

Kyrgios accused Murphy of starting the shot clock too early and was ultimately issued a point penalty at the end of the second set tiebreak for insulting the umpire using an expletive.

The 24-year-old then left the court for what he deemed a bathroom break, despite protests from Murphy, and television pictures showed him smashing his rackets in a tunnel. Kyrgios left the court without shaking Murphy’s hand.

He had clashed with the Murphy two weeks ago at the Washington Open and was also fined by the ATP after being embroiled in an expletive-ridden rant with Murphy at the Queen’s Club in June.