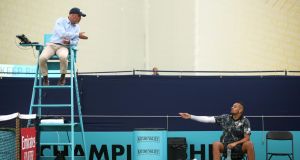 Fergus Murphy, Ireland’s only professional tennis umpire, is virtually unknown in his own country outside the sport. But the 48-year-old has been getting recognised by the right people.

As tennis continues to break away from its buttoned up past, the affable Dubliner is finding that dealing with unhappy and sometimes abusive players has become a regular part of the job where patience as much as knowing the rules governs.

John McEnroe and Ile Nastase may have been outliers of their time. Now, challenging umpires and even Hawkeye has become a sport in itself.

Murphy was in the headlines this week for the second time in three months as Nick Kyrgios boiled over during an explosive outing at the Cincinnati Masters. The Australian flared up at the end of the second set, breaking two rackets during a bathroom break Murphy had refused him permission to take, before appearing to call the umpire a “f***ing tool” at the conclusion of the match.

Earlier, the 24-year-old called Murphy, “the worst ref in the game, hands down” adding “every time I play he’s doing some stupid s**t, every time”.

The ATP acted on Thursday night, slapping the 24-year-old Australian with massive fines of $113,000 (€102,000) after the player stormed off court and refused to shake Murphy's hand.

It is a fact of life umpires become the target when stress bears down on players. Murphy has become used to the tantrums. But they are becoming the norm.

At Queens back in June, Kyrgios launched an expletive-ridden rant at the Irish umpire after missing a set point against Roberto Carballes Baena, claiming the Spaniard had double-faulted.

“Like, what are you actually doing up there? It was this far out. Bro, it’s taking the piss. I refuse to play.”

After issuing a code violation for unsportsmanlike conduct, Kyrgios continued his tirade as Murphy sat in silence.

In 2016 the notoriously slow Novak Djokovic was playing his third match in the indoor London Masters against David Goffin, when he received a time violation from the chair. The Serb snapped and went for the umpire before complaining at the end of the game to nobody particular that Murphy “had no clue about the game”. He then vented his frustration against the tournament supervisor, Tom Barnes, before resuming the play.

Murphy has also had some exchanges Roger Federer. There is no vulgarity from the maestro but when Federer stops, looks at the umpire and takes a deliberate walk directly towards the chair with the crowd howling it can be unsettling.

They clashed at the 2018 Australian Open and twice at Indian Wells in 2018 and 2013, when Federer argued with Murphy after he was not allowed to challenge his own serve after hitting a half volley on Stan Wawrinka’s return. Federer believed his serve was out and that the half volley happened in a split second, which meant he didn’t have chance to stop play.

As Federer complained against the perceived injustice, Murphy argued that the rules allowed him challenge his own serve but not after hitting the return.

In 2010 former US Open champion Andy Roddick admitted he was wrong in his clash with Murphy over his ruling on a match point at the Australian Open. The American finished his match by arguing over a Hawk Eye video review decision, which went against him on the first of his two match points.

The video review ruled that a Thomaz Bellucci volley had fractionally clipped the line saving the first match point. But Roddick contended that he wasn’t allowed to play the shot by an out-call from a line judge. Even when he won the next point to clinch victory, Roddick continued haranguing the umpire as he walked to the net to shake hands.

Murphy, who started his umpiring around Dublin in the domestic leagues during the 1980s, eventually left a career in Dublin’s King’s Inns for one in the locker room and has been umpiring at Grand Slam level since 1995. Probably the perfect background for the increasingly belligerent on-court litigation of  life as a tennis umpire.