Team boasts quality and quantity, and has medal opportunities in athletics and boxing 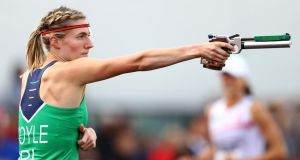 The years building up to an Olympics are always fascinating ones. Calculations are being done across the board to discover how many medals one country can achieve, while for some athletes, the only thing on their mind is qualification for Tokyo.

And despite wall-to-wall sports coverage over the last few months, there has been plenty of activity across the Olympic qualifier spectrum, with Natalya Coyle adding her name to the Irish team and a place in her third consecutive Olympics at the weekend after accomplishing her mission at the European Modern Pentathlon Championships.

It may still be early days but with the team starting to take shape people are probably going to start assessing the chances of an Irish athlete coming home from Tokyo with some extra baggage.

In 2018 alone, 77 Irish athletes secured medals on the world stage. Forty-four of those athletes were female athletes, and seven more were in a mixed group. The rest went towards male athletes.

At the European Championships, hurdler Thomas Barr was the only competitor to come home with a medal having secured bronze in the 400m hurdles, but 2018 was a year for the young guns to prove their worth.

At the Under-20 World Championships in Finland, the quartet of Molly Scott, Gina Akpe-Moses, Ciara Neville and Patience Jumbo-Gula ran an Irish junior record of 43.90 seconds, just .08 seconds off the gold-winning German team who were fastest in qualifying. They are only the third Irish athletes to medal at the U-20 championships, with Ciara Mageean winning silver in the 1500m in 2010, while back in 1994, Antoin Burke won silver in the high jump.

Throw into the mix the even younger and hungrier Irish athletes in Sarah Healy, Sophie O’Sullivan and Rhasidat Adeleke. In 2018, Healy came home with two gold medals from the U-18 European Championships in 1,500m and 3,000m, while O’ Sullivan earned silver in 800m and Adeleke earned gold in 200m. Donegal high jumper Sommer Lecky is also a hope for Ireland too.

Admittedly, it will take some time, nurturing and an ability to maintain these levels to see the senior medals come in, let alone Olympic medals. While the younger athletes have a bit to go in terms of development, race experience and everything needed to be a well-rounded Olympic athlete, those in the athletics world have every right to get excited. For the first time watching the Nationals this year, Irish fans saw a glimmer of hope that won’t die, and many are confident this young crop are here to stay.

Ireland have always competed well in terms of boxing, and 2018 was massive for the sport across all ages, with a total of 29 athletes bringing home medals. The most celebrated include Kellie Harrington at lightweight and Michaela Walsh in the featherweight division. Can either of these boxers replicate the success of Katie Taylor and bring Olympic gold back to Irish soil?

As for left of field sports that we all simultaneously enjoy every Olympic cycle, sailing and rowing are strong contenders too. Although Annalise Murphy may enjoy poking fun at her unforgettable tears in 2012, she more than made up for it in 2016, adding her name to female Olympic medal holders.

With a new boat and enough sailing around the world completed, Annalise is definitely one to watch along with the rowing contingent, which includes Sanita Puspure (some only know her as dominant) and a bunch of O’Donovans for good measure. Also in the water is backstroke sensation Shane Ryan, who won bronze at the Worlds (25m) and European Championships (50m). As for gymnastics, it is pretty fun to speculate over Rhys McClenaghan and his lovely, lovely pommel horse.

And who can forget about our hockey team, working hard under new coach Sean Dancer, who are looking to storm through the European Championships alongside the likes of Belarus, England and Germany?

The year to date is showing that upward trend in medal hauls with athletes at this year’s European Games athletes coming home with seven medals, six in boxing and one in badminton for the Magee siblings.

Coyle putting her name on the ticket to Tokyo makes this Irish team, hopefully, more excited and well-rounded, with medal hopes coming from a variety of sport as well as boxing and athletics. The Irish team is now full of quality and quantity, and hopefully, more names will be etched in the Irish Olympics history books.