Pollution in River Al being investigated by Westmeath County Council 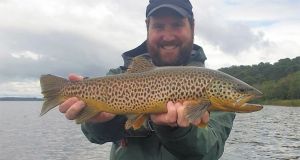 Honeymooner, Eric Klingmann from the US with a fine Corrib trout. Photograph, Tom ‘Doc’ Sullivan.

AN oil spillage affecting the Al River, a tributary of the Shannon in the Athlone district, is being investigated by Westmeath County Council.

Inland Fisheries Ireland was initially alerted to the incident on Saturday, August 10th and attended the scene and supported the clean-up operation.

Staff have continued to monitor the site on a daily basis, however, as of last Tuesday, no dead fish have been observed.

Honeymooners’ great day on Corrib
The latest report from Corrib encompasses numerous centres around the lake, courtesy of Declan Gibbons.

Tom ‘Doc’ Sullivan http://www.tomdoc.com in the Cornamona area, reported some decent fishing on sedges and mayflies where US honeymooners Eric and Lyle Klingmann enjoyed a great day on dries with Eric’s best trout of 3lb on a dry Walkers sedge, size 12.

Larry McCarthy of Corrib View Lodge http://www.corribangling.com experienced a quieter week on the water for three days with UK angler David Kidd with a total of eight trout on sedges, best 2.5lb.

O’Neill takes the honours at Clones annual coarse festival
Ever since the River Finn hosted the junior home internationals in the late 1990s, Clones in Co Monaghan has held an annual coarse festival on a selection of lakes in the area. This year was no exception with the event played out on Annaghmekerrig Lake, Bairds Shore and Bream Rock on White Lake and Mullinary on the Dromore system.

Taking the lead on day one, Newry angler Rory O’Neil went on to retain overall pole position with 43.880kg. Phil McCaffrey’s 11 tench at Mullinary Lake was sufficient for second placing on 39.620kg, whilst a similar catch of tench catapulted John Potters from 15th to 3rd on the final day. Finishing 4th was Tony Kersley followed by visiting angler Mick Smith.

Pole angling legend and former world champion Kevin Ashurst, celebrating his 80th birthday, attended the festival having close links to Clones where his dad Benny brought him at 16 years of age.

Congratulations to the top five rotation and section winners and everyone who took part. Clones Coarse Anglers would like to thank Tyrone Guthrie, Annaghmakerrig, landowners, Clones/Ballybay Municipal Council and Creighton Hotel, Clones for their hospitality.

Next year’s festival will be held from 31st July to 3rd August.

Ireland youths’ double success in home internationals
Ireland’s youths’ fly fishing team completed the double at the recent home international match on Lake Menteith in Sterlingshire, Scotland with a convincing win in both the individual and team categories.

Two practice days were sufficient to decide tactics to adopt prior to match day and this information proved invaluable. “They [the team] went to their boats with an unshakeable belief in their ability to succeed,” manager Noel Farrar, said.

Qualifiers for the 2020 team will start shortly and details will be sent to club secretaries.

“We look forward to welcoming new entrants, so make sure to get your entry to us via your club,” said Farrar.