After winning four Olympic golds in Rio, the swimmer was happy to be just another teenager starting college 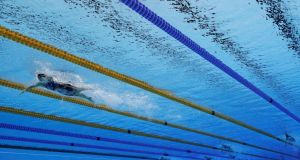 Katie Ledecky of the United States leads the field in the 800m freestyle final at the 2016 Olympic Games at the Olympic Aquatics Stadium in Rio de Janeiro. Photograph: Adam Pretty/Getty Images

There is a photograph from the 2016 Olympics that captures the true extent of Katie Ledecky’s superiority over her competition. As the 19-year-old is about to touch the wall to win the 800m freestyle final, an overhead shot shows no other swimmer in her half of the pool. Ledecky is in mid-celebration, goggles up, looking at a clock showing she has knocked a couple of seconds off her own world record, by the time Britain’s Jazz Carlin finally hovers into view on her way to silver. Almost 12 seconds later.

“When I watch her swim, it’s like an art,” wrote Michael Phelps in an essay for ESPN. “It’s beautiful. She maximizes her distance per stroke. It’s just something you don’t see in swimming.”

A few weeks after NBC beamed her into America’s living rooms garnering four golds (the 200, 400 and 800 freestyles, and the 4x200 freestyle relay) and one silver (the 4x100 relay), Ledecky started college at Stanford University. In a class called “How Beliefs Create Reality”, Professor Alia Crum divided the new students into pairs and, after a brief conversation, each was supposed to make a speech introducing the other person to the class. Ledecky’s partner gave a very brief spiel, “This is Katie. She really loves to swim and this summer she met all of her goals.”

The humility that prevented her from telling a classmate how she’d spent her time in Rio de Janeiro confirming her status as the most dominant female swimmer ever is part of the package, Ledecky seeming to be cut from different cloth. She prays before every race, the Hail Mary being her go-to benediction, and her clippings file includes, alongside entries from every major newspaper and media outlet in the world, interviews with the Northern Catholic Register, and answers to questions such as, “What do you appreciate most about Catholicism?”

“I think our devotion to Mary is very beautiful,” said Ledecky. “She has a sacred role in Catholicism, and her strong faith and humility are things we can learn from. More than anything, praying just helps me to concentrate and let go of things that don’t matter in that moment. It gives me peace knowing I’m in good hands.”

Ledecky’s is not the usual path of a swimming prodigy either. Up to age 11, she was still taking Irish dancing lessons (she was christened Kathleen and her mother’s family are Hagans) and playing soccer and basketball. Like a normal child. In the dysfunctionally hot-housed world of competitive swimming, to be juggling multiple pursuits once you’ve evinced any talent at all is almost unheard of. Which explains why today she bristles at stories of parents pushing girls as young as four to ludicrous lengths in their attempts to produce the next Ledecky.

“I feel lucky that I could enjoy swimming,” she told the New York Times in August. “People need to just relax and take a step back and realise you don’t have to be great at this young age. It’s not about immediate results.”

She retains a refreshingly holistic approach to the sport she dominates. Rather than turn professional after Rio, she remained an amateur so she could swim for Stanford University’s women’s team. Since so many NCAA events take place in 25-metre rather than 50-metre pools, it was a decision she and her coach knew would stymie her preparation for the Tokyo games. But she wanted the complete college experience and it turns out the potential impact on her Olympic training may have been overstated.

After leading Stanford to two national titles, she finally renounced her eligibility earlier this year, and in her first competition as a pro, shaved five seconds off her own world record for the 1500m freestyle, winning her heat in that competition by a whopping 49 seconds. If that represented immediate payback for TYR Swimwear, who signed her to a seven-year $7 million contract, the endorsement opportunities have been piling up since she first announced herself with her shock victory over England’s hotly-favoured Rebecca Adlington in the 800m freestyle at the London Olympics.

Six months before that race, Ledecky wasn’t even expected to make the American team and had scarcely impacted beyond her native Maryland. The unfortunate Adlington knew very little about the high school sophomore until the 15-year-old accelerated away at the start and refused to be reeled in.

Of course, like any swimmer emerging in these circumstances and shattering world records in the process (14 at last count), there has been innuendo about steroids. To this point, sports scientists who have examined her rate of improvement from 11 to her first gold testify that her progress shows no outward signs of artificial inflation or chemical assistance.

“I trained for it,” said Ledecky when asked about German media claiming her performances should be deemed suspect. “I worked hard for it.”

If that answer hardly suffices these days, everything from her Catholicism to her work ethic is cited when refuting all doping talk. Unlike Phelps, the swimmer to whom she is most often compared, she doesn’t have a freakishly long torso or any other physical abnormality to explain how far she remains ahead of the pack. Indeed, following a battery of physical tests carried out at the American Olympic Training Centre, the 60-page examination of Ledecky concluded, “The findings are remarkably unremarkable”.

Only time anybody has ever said that about her.