America at Large: Kronk Gym, a place that offered a ‘chance at life’ 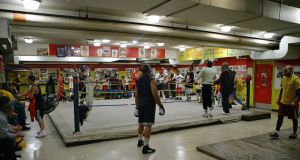 The basement where boxers trained in the Kronk boxing gym. The Kronk was a place that welcomed any kid searching for a purpose or an outlet. Photograph: Getty Images

Paul Dubé was a promising if troubled cruiserweight from Montreal. He’d been knocking around the Kronk Gym for six months, getting used to being called “white meat” by the locals, when he finally got the chance to spar with Tommy Hearns.

A huge step up in class for the Canadian, the gap was made wider by the fact Hearns had his trainer Emanuel Steward in the ring throughout the session, advising him exactly which punch from his repertoire to unleash next. Finally, frustrated at the beat-down he was receiving from this illustrious tandem, Dubé turned and pushed Steward out of the way. Bad move.

Within seconds, 10 other fighters had clambered through the ropes and set upon him, determined to teach the outsider a lesson in Detroit street etiquette. Hit one, you hit all. When they were satisfied he’d suffered enough, they picked Dubé’s unconscious form from the canvas, threw him into a dumpster out the back, and returned to training.

Eventually, the interloper woke up, dusted himself off, walked back in the door and, dried blood caked all over his face, shouted, “Is that all you got, boys? Is that all you got?” The whole place erupted in the type of raucous laughter that told Dubé he had just earned the right to stay.

With its famously low ceiling, Kronk was a gym like few others. Steward presided over savage sparring sessions that became the stuff of fistic legend, most fighters testifying their real bouts paled next to what they endured in that unforgiving basement. He routinely turned the thermostat up to 90 (the first thing Andy Lee noticed when he arrived was the heat) to make boxers so uncomfortable that generations of them swore the walls used to actually sweat.

Those same walls fell victim to the wrecking ball last week as the city of Detroit set about reducing to rubble a building that produced 30 world champions, three Olympic gold medals, and saved the lives of hundreds more on the troubled West Side.

“Interwoven with the themes of unity and order and inspired by ferocious competition,” wrote the great William Nack in Sports Illustrated, “the Kronk, under Steward, became a kind of paradox: a Boy Scout troop set in a Darwinian laboratory.”

In another town, in a different time, a place of such historic and cultural import might have been preserved as a monument to an era when boxers from all over, Lennox Lewis, Prince Naseem, Oscar de la Hoya and Julio Cesar Chavez among them, came to work at the Kronk. In cash-strapped Detroit, there wasn’t the money, the will or the appetite to save the storied institution on McGraw and Junction where men like Hearns, the McCrory brothers, Milt and Steve, and Duane Thomas honed their craft. All that will survive now is the legend of what once was. Some legend too.

Named for John Kronk, a Polish immigrant turned Detroit political powerhouse who restricted the price of the street car to five cents to make it accessible to all. Some regard this as his greatest achievement. Others point to a decision in 1921 to fund the building of a recreation centre that would make him world famous long after his death. Half a century after it first opened, Steward went down into the basement to coach his brother James for the Golden Gloves, and ended up changing the course of sporting history.

A lineman with the Edison power company by trade, he was soon earning $35 a week as head of the Kronk’s recreational boxing programme. Enough to persuade him to give it a go as a full-time job.

Within a decade, that room started pumping out world champions and Olympic contenders even as elderly constituents played bingo upstairs. Befitting somebody who had been saved from the streets by the sport in his own youth, Steward’s remit always went far beyond catering for the elite fighters who flew in to tap into his expertise.

The Kronk was a place that welcomed any kid searching for a purpose or an outlet, a policy that may explain why cars parked outside were considered untouchable by local hoodlums. Of course, they didn’t suffer fools inside either. When a feud between Hector “Macho” Camacho and Pernell “Sweetpea” Whittaker threatened to boil over one day, Steward reputedly pulled a gun to pacify both camps and to remind them who was in charge.

It was his house and, even after the mendicant city of Detroit shuttered the doors of the rec centre to save money, he continued to pay for its upkeep out of his own pocket. Just like he often privately financed the education of fighters looking to create a life beyond the ring. A few years before his death, Steward was forced to move his operation from its first home, and, once the boxers departed, the old Kronk, like so many evocative slices of history dotted around the Motor City, was abandoned and allowed to fall into disrepair.

After a fire tore through the structure last year, Tommy Hearns stood outside the smoldering ruins, poignantly wrung his hands and told the Detroit Free Press, “It’s just sad to see that people didn’t value this place like we did. What this building brought for me was a chance at life. I got a chance to become somebody out of this building right here.”

The Hitman, and so many more.