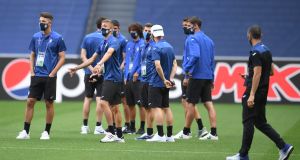 Atalanta players have a walk around in the Estadio da Luz in Lisbon ahead of the Champions League quarter-finals. Photo: David Ramos/Pool

It’s been a long road back towards an Ireland jersey for Ian Madigan but the new Ulster man hopes he has nearly reached his destination as he prepares to restart with his new province. The Dubliner is 31 now and following sticky experiences at Bordeaux-Begles and Bristol Bears, he has made a new home in Belfast with one primary intention; to ensure his last Ireland game will not be a 19-13 defeat to South Africa in 2016, writes Gavin Cummiskey. Elsewhere, England’s Anthony Watson believes it is pointless to force Premiership players to take a knee after some expressed concern at doing so over the weekend. “The whole point is for it to mean something. I don’t think anyone should have the option taken away from them. It’s important that it is very individualised,” he says.

Moving on to GAA and Seán Moran writes in his column this morning that it won’t take much more before cancelling the All-Ireland seems like a solution. “The recent collective experience of the GAA community has now led to a rethinking of the association’s previously least questionable tenet – the untouchable importance of the intercounty game,” he writes. County teams are due to return to training on September 14th but Tyrone’s Conall McCann believes they should be allowed to do so earlier and says that some counties are already training in breach of the guidelines.