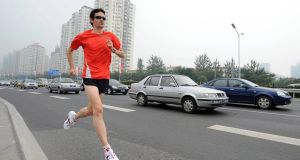 It starts vacant and uncomfortably numb, one leg first, then the other, needles and then sharp swords, prompting a helpless curse that slowly works itself from the brain down to the nerve endings and then, suddenly, hits the realisation of The Wall.

The Wall – where nothing and everything feels imaginary, where the body begins wailing and eating itself as it enters its interminable oxygen debt.

The Wall – where you touch the void of full glycogen depletion, and the dryness in the mouth and heat of the blistered heel is telling you there will be blood.

The Wall – where the marathon turns from prologue to monologue, from kicking-ass to ass-kicking, from ecstasy to agony and if you’re lucky enough then maybe back again, and the only people who can truly understand that are the ones who have run face first into it.

It doesn’t matter if you’re running the distance for money or for medals, for charity or for fun, because The Wall is always there waiting for you at some point along those 26 miles and 385 yards, maybe later rather than sooner, on one or the other side of the inevitable.

It was October 2001, and after a few years of false threats and broken promises, time to make my marathon running debut in Dublin. The classic long distance run, along what Con Houlihan always described as a sort of horizontal Everest, and definitely some sort of sporting aspiration embedded in the mind from an early age.

From the summer of 1984, to be exact, when after three weeks holidays on the Aran Islands we loaded everything back onto the ferry and then drove from Galway back to Dublin in time for the start of the men’s Olympic marathon in Los Angeles. “They’re going for silver, they’re going for bronze, and Treacy has moved away from Spedding . . . John Treacy has 100 metres to go...”

There was and always will be something spellbinding about Treacy’s silver medal run that night, him breaking through The Wall and every conceivable pain barrier before and after it, before standing on the Olympic medal podium, alongside Britain’s Charlie Spedding and gold medal winner Carlos Lopes of Portugal.

Not only because it was Treacy’s first ever marathon, in arguably the greatest Olympic marathon field ever assembled, in a race he was never expected to medal: it was also the way others hit The Wall and fell away one by one. Ikangaa, de Castella, Salazar...

Treacy did have some harder hits off The Wall in subsequent years, including his second ever marathon in Boston in 1987: at Heartbreak Hill, which comes around mile 20, it can hurt as much coming down as it does going up, and by mile 21 he was reduced to a near crawl, and it took two hours to be driven through the crowds back to the finish.

He vowed to come back and he did, finishing third in Boston in 1988 in an Irish record of 2:09.15 that still stands all these years later, and again in 1989. For the fourth time, in 1991, he told me the best place to watch was on the streets outside Boston College, where somewhere in the heat of winning the battle Treacy slowly and then suddenly sat down on the curb, clutching his right hamstring with one hand, covering his face with the other, and cursing The Wall.

There is a common myth among marathon runners that your first effort will often be your best, and that often rings true. When, after winning four successive World Cross Country silver medals, Catherina McKiernan moved up the marathon in 1997 she ran the then fastest women’s debut in history, winning Berlin in 2:23:44 as if The Wall too was a common myth. McKiernan won London the following year, then improved her best in Amsterdam to the Irish record of 2:22:23 that also still stands all these years later. Then she did hit it, in Chicago in October of 1999, finishing back in 12th place in 2:35:51, the last marathon she ever finished. The Wall has the power to do that.

Sonia O’Sullivan also made her marathon running debut in Dublin, in 2000, just over a month after winning a silver medal in the 5,000m at the Sydney Olympics, finishing comfortably ahead of the next best woman in 2:35:42. Two years later, among her first fully elite field in New York, she hit The Wall disguised as the Queensboro Bridge, and finished 12th in 2:32:06. Even though she later improved her marathon best again to 2:29:01, in London in 2005, it’s an Everest she perhaps never conquered as well as she might.

That Dublin Marathon in October of 2001, the last year of my 20s, raging against the dying of my youth only still bold enough to believe in it, five months of hard crash training had lured me into believing I could at least be the best of the Irish.

Which for a while I was, passing halfway in 70 minutes and still mixing it with some of the Kenyans as well, before somewhere around 21 miles both wheels blew off and I finished in 2:31:09, battered, bloodied, broken by The Wall, hurling every conceivable kind of verbal abuse at myself and swearing never again.

Until 2003, when dreaming up fresh ways to impress the sports editor, I signed up for the Athens Marathon – a sort of test run for the Olympic marathon the follow year. This of course being no ordinary marathon, but the original one, tracing the exact footsteps of Pheidippides, the Greek messenger who in 490 BC ran the 26-odd miles from the town of Marathon into Athens to announce victory over the invading Persians, shouting ‘nenikikamen’ (‘rejoice, we have conquered’) and then promptly dying, as well he might.

I didn’t die on that original marathon, revived for the first modern Olympics in 1896, but the murderous hills of The Wall around 20 miles nearly killed me, before just about finishing in 2:51:56, cursing words too horrible to repeat. Oh Vaporfly where were thou?

There were several more after that – the aloha spirit of Honolulu in 2005, the madness of the Reggae Marathon in Jamaica in 2007, another crack at that best in New York in 2009 – before the last of them, in London 2012, and another sort of test run before the Olympics later that year.

That might well have been the best of them, a city that will always have its place in marathon history, beginning with the climax of the 1908 Olympic marathon, when the Italian Dorando Pietri staggered bow-legged into White City Stadium, another victim of The Wall, bundled over the winning line and then promptly disqualified. This was also when they moved the start inside the grounds of Windsor Castle, and measured an exact 26 miles and 385 yards to the finish in front of the royal box at White City.

As it turned out, my experience over those last 385 yards suitably mirrored Pietri, my time of 2:52:37 so unevenly split that everything ended in mutual separation, battered, bloodied, broken by The Wall, again, and with that left forever realising that first marathon should have been better than my best.