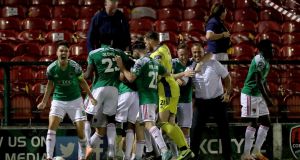 A goal from Ricardo Dinanga at the very end of injury time sent 10-man Cork City past Longford Town at Turner’s Cross on Tuesday night and into the second round of the FAI Cup.

With the game looking set to be decided by penalties, there was time for one last City attack in the 121st minute as Dinanga received a pass down the right flank from fellow sub Charlie Fleming and dribbled into the area before creating space and firing past Luke Dennison.

Longford, third in the First Division, were more than a match for the side bottom of the top flight and will probably feel that they should have won the tie in 90 minutes, especially as City were reduced to 10 men when Graham Cummins was sent off with just under a quarter of an hour to go.

While City – without a goal in two league games and the Munster Senior Cup final since the restart – looked likelier to score in the first half, they didn’t ask enough questions of Dennison in the Longford goal and they lost one of their brightest players, Cian Bargary, just before half-time.

Even before Cummins’ dismissal for hauling back sub Callum Warfield as the last man, Longford had shaded the second half and sub Aaron McCabe went close for them on more than one occasion.

They were unable to take advantage of their greater manpower though and City captain Cian Coleman almost struck a winner at the end of normal time.

In the additional half-hour, Kevin O’Connor and Dylan McGlade went close for the hosts but penalties were on the horizon until Dinanga’s late impact.