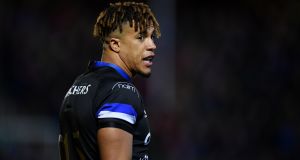 Bath winger Anthony Watson: ‘You have to give people a choice, because as soon as it is forced on anyone to have to do anything it becomes pointless.’ Photograph: Dan Mullan/Getty Images

England and Bath winger Anthony Watson has insisted there is no point forcing Premiership players to take a knee before matches in support of the Black Lives Matter movement after it emerged some have expressed concerns over doing so this weekend.

Representatives from all 12 clubs met via conference call on Tuesday to discuss how best to show support but, in the absence of any directive from Premiership Rugby or the Rugby Football Union, different sides are expected to come up with different gestures.

Harlequins host Sale on Friday night in the first Premiership match since the lockdown began and both sides are intent on showing a united front against racism. But there has been a degree of reluctance over taking a knee within the league because of concerns over expressing support for any political messages associated with the Black Lives Matter movement. The former England winger Ugo Monye, a Guardian columnist, has been heading up a working group with a statement on behalf of the players expected this week.

When the Premier League restarted in June all clubs were unanimous in taking a knee but Watson believes making Premiership players do so against their wishes defeats the objective of the movement. “It’s massively important for rugby to get behind the movement, and not just rugby but across the board, sport in general. It’s important to make an impact where you can,” he said.

“You have to give people a choice, because as soon as it is forced on anyone to have to do anything it becomes pointless. The whole point is for it to mean something. I don’t think anyone should have the option taken away from them. It’s important that it is very individualised.”

Monye has confirmed he will take a knee at Harlequins v Sale on Friday, where he will be working for BT Sport, and his former club Harlequins are expected to do likewise.

The Sale captain, Jono Ross, was tight-lipped as to what his side had planned but was forthright on the issue. “I don’t think anyone in our squad or across the Premiership is racist,” he said.