Sean Hoare’s goal enough for Dundalk to see off Waterford 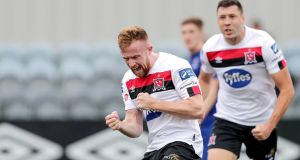 Sean Hoare’s early goal booked Dundalk FC’s place in the second round of the Extra.ie FAI Cup at the expense of Waterford at Oriel Park on Tuesday night.

Vinny Perth’s side came into the game on the back of two poor league results since the restart but this was a better display overall as their bid to reach a sixth successive final continues.

Hoare was one of several players who have been missing for Dundalk since the resumption but he made an immediate impact on his return with what proved to be the game’s only goal on 17 minutes with a deft header from Stefan Colovic’s free kick.

The Louth men were always on top throughout but despite a series of chances after that they could find no way past Tadgh Ryan.

At the other end Gary Rogers was never troubled although John Sheridan will be pleased with the effort of his side ahead of the return meeting between the sides on Friday night at Oriel Park in the league.

Both sides made six changes to their team from the weekend’s league matches, with the hosts making the breakthrough early on. Colovic’s inswinging free kick from the left was inch perfect for the unmarked Hoare to head home his first FAI Cup goal since the 2018 final.