Madigan’s primary goal is Ireland caps after switch to Ulster 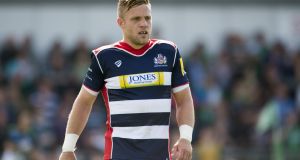 Old concerns held by Ian Madigan about joining a rival province have been consigned to history. The 10 former Leinster players currently on Ulster’s books helped allay any lingering doubt.

Madigan is no longer the jack of all trades that accumulated 30 caps in Johnny Sexton’s shadow before a grand adventure around the French and English club scene. The Dubliner is 31 now and following those sticky experiences at Bordeaux-Begles and Bristol Bears, he has made a new home in Belfast with one primary intention; to ensure his last Ireland game will not be a 19-13 defeat to South Africa in 2016.

“It’s a serious boost for Andy Farrell to give me a shout out considering I haven’t played a lot in the last 12 months,” said Madigan in reference to a lost season caused by Bristol and former Connacht coach Pat Lam refusing to select him in matchday squads. “Coming back and being able to play for one of the Irish provinces and having [the chance to play for] Ireland as one of my main goals has really focused my training and given me something to really aim at.

“I’m under no illusions that I have to prove myself here with Ulster. There are some good quality [outhalves] with Billy [Burns] and Bill [Johnston] and Mike Lowry can play 10 or 15.

“If that means working my way into the 23 and coming off the bench and being patient to try and get a start, then playing well when I do get a start, it goes from there.

“If you are playing well for any of the Irish provinces you are in the mix for national selection. There is a lot of rugby to be played before that can happen but it is something that really excites me - it is still my number one goal to play for Ireland.”

The Madigan who left Dublin four years ago was seen as an inside centre as much as he could cover fullback but wearing number 10 sounds like his intention.

“The last 12 months was a frustrating period of time but . . . I feel I’m in the best physical condition that I think I have ever been in. The way the team is set up with Dwayne [Peel] in attack will really suit my game. Hopefully it all comes together and this is going to be my best season.”

With no warm-up or low key matches when rugby returns to the Aviva stadium on August 22nd, a growing pattern of injuries has the potential to reach chronic levels.

Any players needing surgery during lockdown were forced to wait. This includes Iain Henderson, who follows James Ryan and Quinn Roux into a period of rehabilitation following a hip operation, which leaves Ireland down two primary locks ahead of a hectic international window starting in October.

“Look, he’s our skipper and he’s a top man to have around the place,” said Ulster coach Dan McFarland of Henderson ahead of the season opener against Connacht on Sunday week. “We are losing a really big player – an Ireland international. That’s going to hurt.”

Henderson will be out for eight to 10 weeks.

“That was a planned operation,” McFarland explained. “His hip has been giving him trouble for a while. We have been talking about when to get the hip operation done. Unfortunately the Covid situation obviously meant that a lot of surgeries were delayed and put back and that was the case for Ian - as it was for a few of the guys.

“We could have potentially put it off longer but often with these kind of things it just needs to get done.”

The growing injury list could provide opportunities for less established locks like Ryan Baird and Gavin Thornbury to push into Farrell’s national panel.

“From the minute I laid eyes on Gavin I thought: He’s an international footballer,” said Connacht coach Andy Friend. “That’s another area of our squad we are really healthy – we have Gav, Ultan Dillane and Quinn Roux who are in my view three international locks.”

Like Joey Carbery at Munster – who is not expected to recover from wrist and ankle surgeries until mid-September – Will Addison’s time with Ulster continues to be marred by back problems.

“It’s really frustrating, for no one more than Will,” McFarland continued. “I feel for him. It has been niggling at him for a while. He has a history of back (injuries) over the last while and he has dealt with it really well. But this episode has set him back.

“His rehab is progressing well, but it’s not something that is straightforward. It’s not like doing an ACL where guys say ‘Right, we know what operation we are going to do, we know what the rehab looks like, so we can pretty much tell you that you are going to be back on this date.’

Addison’s absence leaves a vacancy at fullback that may be filled by Jacob Stockdale, Lowry, Matt Faddes or even Madigan.