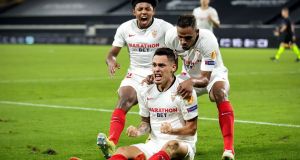 Sevilla’s Lucas Ocampos celebrates with his teammates after scoring the winner in their Europa League victory over Wolverhampton Wanderers. Photo: Friedemann Vogel/AP

Wolves’ epic season ended in agonising style as Lucas Ocampos headed in an 88th-minute goal to send Sevilla into a Europa League semi-final against Manchester United. There can be no begrudging the Spaniards their win, given how much they dominated, but this quarter-final might have turned out very differently if Raúl Jiménez had not had a penalty saved in the 11th minute and if the referee had ordered a retake after a Sevilla defender encroached.

Before this game Nuno and his players spoke of their pride at reaching Wolves’ first European quarter-final since 1972 and of their determination to venture even farther. Getting to this stage was no small feat: this campaign began last July but, in a deeper sense, it started with the appointment of Nuno in May 2017. Wolves had just finished 15th in the Championship, squashed glumly between Barnsley and Ipswich Town. Nuno built an identity that has earned promotion, two top-half finishes in the Premier League and this glamorous date with the Europa’s League most decorated club.

The only down side to Wolves’ swift rise became clear last week when they were punished for breaching Uefa’s financial fair play rules, a problem that only arose because they qualified for European competition so quickly. Sevilla’s manager alluded to that before this game, claiming mischievously that “after Manchester City [Wolves] are a club that’s spent more than anyone”. If Wolves had a squad as rich as Lopetegui suggested, there would not have been such fretting about the possible effects of fatigue on players who came into this game having contested seven more matches this season than Sevilla. There might also have been less concern about the implications of losing Jonny Otto; in the absence of the injured wing-back, Ruben Vinagre was assigned the biggest test of his career. Undaunted, the 21-year-old started well.

At least the weather gave Wolves a break: with clouds covering Duisburg the temperature was cooler than forecast. Before kick-off Conor Coady’s rallying call could be heard loud and clear: “Let’s do what we do!” hollered Wolves’ captain. Thirty-seven seconds later Adama Traoré and Jiménez did exactly that, combining with familiar menace, except that the striker’s header from Traoré’s cross was close enough to the goalkeeper to permit a save.

Nuno’s tactics gave Traoré the freedom to roam where he pleased as part of a front two. In the 11th minute he gave an awesome demonstration of his threat, collecting the ball inside his own half before turning and sprinting into the opposing box, where Diego Carlos brought him down in desperation. The defender escaped with a yellow card and his crime paid off when Yassine Bounou read Jiménez’s weak penalty and made a comfortable save. However the penalty should have been retaken as the Sevilla defender who completed the clearance, Diego Carlos, had encroached.

Three minutes later Rui Patrício had to intervene for the first time, pushing away a shot drilled by Suso from 20 yards.

Wolves were grateful to see Youssef En-Nesyri pull a shot wide from 15 yards after Suso opened them up in the 27th minute. As Sevilla found an ominous groove – all zippy passing and nifty movement - Ocampos went close to opening the scoring, curling just wide after another whirring attack. Wolves could just batten down the hatches and hope to eke out at least one more chance for Traoré to storm forward on the counter. None came before half-time.

There was no need for panic at the break; Sevilla had been dominant but not quite cutting, and Wolves generally tend to wait till the second half to bare their own fangs. But could they still do that in their 59th match of the season, against opponents as classy as this? Sevilla certainly had no intention of relenting. As thunder began to rumble overhead, Sevilla resumed attacking in waves.

Romain Saïss, booked in the 48th minute found himself in more difficulty when Ocampos made a run into the box on his blindside and pulled the ball back to Jordan, forcing Leander Dendoncker to make a critical block. Two minutes later Patrício had to stop En-Nesyri after the striker bounded past three defenders through willpower as much as skill. Then Wolves were reprieved by Jules Koundé, who headed wide from close range after a cross by Suso.

Wolves hung in until two minutes from time when Sevilla finally took one of their chances, Ocampos glancing a header from an Éver Banega cross into the net from eight yards. – Guardian