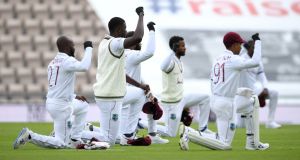 West Indies captain Jason Holder and his teammates take a knee during day one of the first Test against England. Photograph: Mike Hewitt/Getty

Sheffield United’s hopes of European football were handed a massive boost last night after Ireland centre-half John Egan scored his second crucial goal in as many games, his 93rd-minute header giving the Blades a 1-0 win over Wolverhampton Wanderers at Bramall Lane. The result was a big blow for Wolves’ hopes of a Champions League spot, with Manchester United able to open up a six-point gap to sixth when they take on Aston Villa tonight (kick-off 8.15pm). Elsewhere Manchester City submitted Newcastle to their first defeat since the lockdown with a 5-0 romp at the Etihad, while Liverpool ran out 3-1 winners over Brighton on the south coast thanks to a Mohamed Salah brace. Meanwhile West Ham remain firmly in the relegation mire after they were beaten 1-0 by Burnley at the London Stadium. In tonight’s other games, Spurs travel to play Bournemouth and Everton welcome Southampton to Goodison Park (6pm kick-offs).

New Republic of Ireland manager Stephen Kenny spoke to the press yesterday, as he starts to plot a route into next summer’s European Championships via the play-offs. In a rarity for the Irish management, Kenny and his coaching set-up will be based out of Abbotstown - something which could provide the FAI with some sorely needed stability. And Kenny is keen to impose his own philosophy on the Republic as soon as possible, with the opportunity to play in a major tournament on home soil too good to miss out on. He said: “I am looking forward to working with the group of players and making a vibrant and exciting team, a cohesive team, with an attacking threat.”