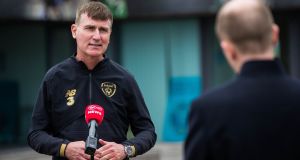 His team not being at a European Championships Ireland are playing a part in hosting is more or less unthinkable according to Stephen Kenny but getting to the finals will require “extraordinary results,” he says, from a side the new manager aims to have playing a very different brand of football, even in Sofia come September.

With the opening game of his reign barely six weeks away now the Dubliner insists he is keen to get going, but accepts there will be considerable challenges involved in fundamentally changing Ireland’s approach when there is so little time to work with players ahead of matches he desperately wants to win.

He expects to have just a day or two on the training ground before he and the squad fly to Bulgaria for the opening fixture of Ireland’s Nation’s League campaign but the key item on the Autumn itinerary, he admits, is the play-off semi-final in Slovakia.

“We’re meeting on Sunday against Bulgaria and we fly on Tuesday,” he says. “Some of the players might even play on the Sunday; I don’t know what the fixtures are.

“For the first Under-21 game, I had a full week here in Abbotstown [and if I had the opportunity to have the same again] I would say, ‘yes, brilliant’. Everyone knew from day one: this is how we’re playing because we had five or six days of 11 v 11, playing with a clear imprint so everyone knew exactly what we were going to do.”

This time, the preparations will be very different and might, he suggests, have to start with online briefings but, he asks rhetorically: “Are you willing to say: ‘Okay, I haven’t got much time so we can’t do it, we’ll just go as is?’. There would be no point in me being appointed. . .

“We have a clear idea about how we want to play against Bulgaria,” he continues, “and the players will get clear information. That’s the nature of the job, you’ve got to adapt.”

His ambition is, of course, to engineer victories, something there is pressure on him to do from day one due to the fixture list he has been handed. Getting to the European Championships is a particular goal, however.

“I think that we have to achieve something extraordinary,” he says of the play-offs. “We have got to get extraordinary results; win away in Slovakia and then win away in Bosnia or Northern Ireland, win two matches back-to-back against significant nations which we have not done in many, many years. We have not looked like doing it but we must do everything that we can to do it now.”

Though the Nations League outings before that, against Bulgaria then Finland, have a significance of their own, they will also be about changing the team’s approach before the trip to Slovakia with Kenny determined that his Ireland side will set out to dominate opponents in a way that no Ireland side has in recent times.

“Bulgaria will be great for us to go and really look to control the game,” he says. “As a manager it’s always my ambition to try and control games. I cannot remember when we last went away from home and controlled a game. I’m not saying that we will achieve it now but it will be our ambition to.”

He repeatedly expresses a firm belief in the players he has available to him as he undertakes the task. There is a clear expectation that established figures like James McCarthy and Harry Arter will be available and, it seems, involved but the likes of Jayson Molumby, Adam Idah and Troy Parrott are likely to get every opportunity to follow Aaron Connolly into the senior international set up once they are doing well at their clubs.

That up and coming generation of players should provide a new range of options, something that is needed around a squad that has had very few fresh faces in recent years.

The association, meanwhile, has just initiated the process of establishing the eligibility of Nigerian-born Rotherham United winger Chiedozie Ogbene, who spent much of his childhood in Cork, but Kenny says there is uncertainty now about the prospect of Daniel Crowley being able to play for Ireland because of the approach taken by Fifa in relation to Seville midfielder Ryan Johansson and the particulars of the precedent his case may have set.

Regardless of the specific personnel, the general scale of Kenny’s aspirations might be regarded as a dangerously high bar for a manager to set himself and as the first game approaches he might be forgiven for feeling slightly daunted by the hype he must now try to live up to but, he insists, he is relishing the opportunity.

“I actually don’t find it in the least bit daunting,” he says. “I’m ready, more than ready. It can’t come quickly enough, that’s the way I look at it.

“I am looking forward to working with the group of players and making a vibrant and exciting team, a cohesive team, with an attacking threat. We’ve got players who love playing for Ireland and we want them to have great experiences, like all the great players of the past have had great experiences playing for their country.

1 James Ryan injury could open the door for Ryan Baird
2 Brentford eye €178m windfall with Premier League promotion
3 Ken Early: Frank Lampard’s problems start at number one
4 All in the Game: Klopp gets the last laugh in quiz show
5 Lockdown hiatus may afford way back for Waterford hopefuls
Real news has value SUBSCRIBE
Crossword Get access to over 6,000 interactive crosswords