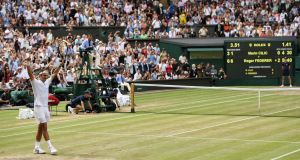 Roger Federer celebrates after he secured his last Wimbledon title in 2017 after victory over Marin Cilic. Photograph: Julian Finney/Getty

It is nearly two decades since Roger Federer first stepped on to Centre Court and began the greatest act of seduction tennis has seen. In July 2001 he was 19, talented but untested in the white heat of grand slam battle. On the other side of the net stood Pete Sampras, the greatest grass-court gunslinger of them all, with a demon serve and volleys as crisp as a fresh banknote.

The American had won seven of the previous eight Wimbledons and more grand slams than anyone else, yet such was the audacity of Federer’s shot-making in his epic fourth-round victory that he quickly held the crowd – as well his racket – in the palm of his hand.

Sampras gave the equivalent of a papal blessing to his young opponent. “There are a lot of good players coming up, and Roger is one of them,” he said. “But I think he is a little more extra special than the other guys.”

In the Guardian, Martina Navratilova went even further, speculating: “Federer’s win over the champion could be the start of a new era in the men’s game.”

And so it proved. It took a further two years for Federer to win his first grand slam, at Wimbledon in 2003, but soon he was dominating the sport on and off the court. When he first met Tiger Woods in 2006, when both were at the height of their powers, they connected as only they could. “I’ve never spoken with anybody who was so familiar with the feeling of being invincible,” Federer said.

That feeling did not last long. The emergence of Rafael Nadal and then Novak Djokovic saw to that. But as the sun begins to set on the greatest era that tennis has known, Federer stands at least as tall as anyone.

Sport is primarily a numbers game and for now the 38-year-old has them on his side. He has won 20 grand slams, more than any other male player, and has been world No 1 for a record 310 weeks. That said, tennis’s history books are not written in permanent marker. Nadal is breathing down his neck on the all-time list with 19 slams, while Djokovic has 17. Both have winning head-to-head records against Federer, as well as age on their side. They could yet knock him off that particular perch.

But even if they do, there is another way of teasing out Federer’s greatness. Imagine you had to pick a player for a match to save your life – only you didn’t know the surface, the opponent, or whether a modern racket or an old wooden one would be used. Who would you pick? Clearly you would want someone with an all-court game, who could serve and volley as well as hit punishing ground strokes. That man would surely be Federer, given he is the only player to win at least 10 titles on three different surfaces.

Federer is undoubtedly the greatest player on turf, having not only won more grass-court titles, 19, than anyone else but more also than Sampras (10) and John McEnroe (eight) combined.

His greatness is also shown by his longevity, with a span between grand slam victories of nearly 15 years, from Wimbledon 2003 to the Australian Open in 2018, when he was 36. To put that into perspective, Sampras won his last slam at 31, Rod Laver at 31 and Andre Agassi at 32.

What makes Federer’s late period even more impressive is that for nearly five years, between 2012 and 2017, he failed to win a slam, partly because of various back and knee injuries. The era when his racket played like a Stradivarius, and the American writer David Foster Wallace compared watching him to a religious experience, appeared over for good.

Yet the old dog learned some new tricks, including the SABR – the Sneak Attack By Roger – which involved Federer moving up the court to hit a half-volley on his opponent’s second serve – as well as improving his topspin backhand, to launch one of the great sporting comeback stories.

An under-appreciated point of Federer’s greatness was made by the ATP tennis analyst Craig O’Shannessy recently. Having crunched all the numbers from the ATP Tour since 1991, O’Shannessy found that even in the matches he lost, Federer claimed almost 48 per cent of points – more than any other player in defeats. You would never guess it from his demeanour but the Swiss player is one of the toughest outs in tennis.

For many, though, Federer’s greatness does not only come down to the numbers, but something more mystical. You see it in the balletic grace of his movement and those impossibly high-tariff ground strokes; and how he makes the outrageous appear effortless. You see it in the symphonic variety of his play and how in an era of baseline grunters he is also a wizard at the net; using his racket as a wand as well as a weapon. And most of all you hear it with the gasps of the crowd as another sublime winner finds its mark. – Guardian

1 Worst sporting moment: White knuckle ride on a hate-filled night at Windsor
2 Irish Open confirmed for Galgorm Castle in September
3 Rugby to return in England with rucking but no hugging
4 Acute disillusionment the only response to growing FAI debacle
5 Irish roots with the bit of Jo’burg dog: Curtis Campher has arrived
Real news has value SUBSCRIBE