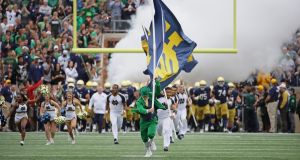 Notre Dame’s Leprechaun mascot leads out the team ahead of a game against the Ball State Cardinals in 2018. Photograph: Jonathan Daniel/Getty

Nearly two decades have passed since a group of Irish postgrads started pucking a sliotar around on the lawn of Notre Dame’s north quad. The spectacle attracted so many curious onlookers that they formed a university hurling club, printing t-shirts that advertised the sport as “the fastest field game on earth”. Those caught the eye of a lacrosse coach who took umbrage at some cheeky foreign stick and ball game coveting a boast he believed belonged to his own code. Suddenly, the hurling evangelists were brought in to explain their audacious claim to the college athletic department.

“He said something about the lacrosse people being upset and objecting to the slogan,” said Lorna Whyte, a former Dublin junior camogie player then studying for a PhD in cell and molecular biology. “We either had to scientifically prove this or else add ‘Not been proven’ in brackets on the T-shirt. There was no point trying to argue about the scientific proof so I just reminded him that the Notre Dame football team are the Fighting Irish and have an Irish leprechaun as a mascot that we might find kind of offensive but have never objected to.”

And that was enough. All ludicrous concerns about t-shirt bragging rights immediately evaporated. The mere suggestion that somebody, especially from Ireland, might have an issue with their beloved mascot shut down that debate. The last thing Notre Dame wanted was a troublesome conversation about how their leprechaun, his fists raised, hat askew, and chin curtain beard, is near enough a replica of the simian-featured caricatures deployed by Punch magazine when mocking the Irish throughout the 19th century. Except their rendition is central to the slickest merchandising operation in all of American sport and is, literally, worth millions to them each year.

Every time there is a fresh controversy about pejorative team names, Notre Dame’s leprechaun too often seems to skulk beneath the radar. Right now, the Washington Redskins and the Cleveland Indians are in the spotlight and on the clock, both clubs having just announced they are considering whether to change to monikers less racially insensitive to Native Americans. While Washington’s notoriously recalcitrant owner Daniel Snyder is doing so in response to commercial pressure from FedEx, a major sponsor, the Indians’ management appear motivated more by the current groundswell of public opinion and the increased clamour for social justice.

Cleveland have travelled some bit down this road before. In 2018, they removed their Chief Wahoo logo, a feature on all club uniforms since 1947. With exaggerated facial features and a comical appearance, Wahoo offended Native Americans who compared it to blatantly racist depictions of African-Americans in the days of segregation and first asked for it to be withdrawn as far back as the 1970s. When Cleveland finally, belatedly, succumbed to the pressure, it prompted a national debate in which Notre Dame’s leprechaun briefly became ensnared after ESPN’s Max Kellerman said it should go too because it also perpetuated “pernicious and negative stereotypes.”

The most glaring difference between the truculent leprechaun and the now deleted chief appears to be that a lot of Irish-Americans, a constituency famous for clinging to an archaic version of the land of their ancestors, take perverse pride in Notre Dame’s mascot.

Many from that demographic, who have never even visited the university in Indiana or the country for that matter, buy clothing with this charmless character, his dukes poised in perpetual combat, emblazoned on the front. If what looks outdated and cringeworthy to someone in Dublin, Ireland is somehow regarded a symbol of cultural heritage to a guy in Dublin, Ohio, there are some who see through the shameless shamroguery.

“For all saying ‘they’ve never met a single Irishman’ offended: The Notre Dame mascot is an embarrassment,” tweeted Brian Kenny, a broadcaster on MLB Network and the son of an Irish immigrant. “It paints us as a bunch of foolish, drinking, fighting, singing, dancing, & lying gnomes...”

While the leprechaun has only been part of the university’s marketing since they paid a designer called Ted Drake $50 to draw it in 1964, “The Fighting Irish” thing goes back farther. In the early days of college gridiron, teams representing Notre Dame, an institution founded by French Catholic priests, were variously known as “Ramblers”, “Nomads” and “Hoosiers”. Only after Eamon de Valera, then priomh aire of the First Dail, visited South Bend in 1919 did “The Fighting Irish” nickname gain real traction.

“De Valera’s visit applied momentum to ‘The Fighting Irish’ nickname and the Scholastic (the college newspaper) began employing it in game accounts,” writes Murray Sperber in his definitive Shake Down the Thunder: The Creation of Notre Dame Football. “After the 1919 game over Army, the student reporter wrote that the ‘game unmistakably rebranded the Notre Dame warriors as ‘The Fighting Irish’.’ In the early ‘20s, the students’ fondness for the nickname also led to Notre Dame’s first mascot, an Irish terrier called Tipperary Terence. Other Irish terriers succeeded Terence, and the one in 1933, named Clashmore Mike, learned performing tricks.”

Over time, the dog was usurped by the leprechaun, and, these days, undergraduates compete for the right to dress up in a cutaway suit of garish green and to act the eejit during pep rallies and games. On campus, it’s considered the greatest honour to get to brandish that shillelagh, prancing along the sidelines, bringing the luck of the Irish. Or something.