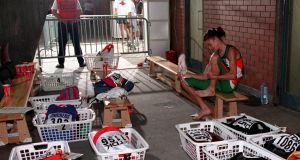 Sonia O’Sullivan after her fourth place finish in the 3,000m at the 1993 World Championships. Photograph: Billy Stickland/Inpho

I do love a good newspaper clipping. There is something intriguing about looking back at the written news on the faded paper, revisiting not just the reason why you kept the picture or the story – but what’s on the back of the page I once cut out and put away for safe keeping?

There is less and less of this now for future generations. With so many people reliant on the online version, the links or the tweets, gone are the extra bits that add even more meaning to the date and space of the memory, bring even more significance to the reflection in time.

I often lived in my own bubble, unaware of anything else going on in the world outside: between the training and racing, preparation and recovery, everything else was a blur. So when I fall upon an old clipping it can take me back in time and also allow me to see what else was going on, reliving a time beyond the training track and racing world.

Back home in Cobh, in quarantine for the time being, has afforded the time for this too, where I’ve also been slowly ploughing my way through an old book called Swoosh, first published in 1991.

As the title suggests, it’s about the shoe company, subtitled The Unauthorized Story of Nike and the Men Who Played There, and written by Julie Strasser, herself a former Nike employee, and her sister Laurie Becklund from the Los Angeles Times.

Step back in time

It’s strange because I can clearly remember this book when it came out, lying around the athletes house at 45 Park Road in Teddington. I didn’t remember what was in it, but the cover alone takes me right back to 1993 when the paperback edition was being passed around. To me it’s also been a step back in time, to see what was going on in the background while I was one of the athletes fronting things out on the track.

Maybe the lack of social media and online interactions kept certain things more segregated. We competed on tracks all over Europe, and at the time I was just out of Villanova University and recently aligned with Reebok, who had also been the college sports gear and shoe provider.

We didn’t ask too many questions, happy to have as many shoes and as much gear as required, a monthly payment and maybe some record bonuses that might pile up in the bank, but certainly oblivious to the shoe wars that were going on in the background, and indeed the men behind it.

It was a time just removed from amateur athletics. Money wasn’t talked about openly and yet the top athletes travelled the world, stayed in the best hotels, without a financial care in the world. No doubt Swoosh was a much talked about book but I was fully absorbed in my first full year of life on the European circuit, leading up to the 1993 World Championships in Stuttgart.

When you’re entirely focussed on one thing like that, there can be so much more going on around, even in the same industry, that you’re totally unaware of. Like parallel worlds operating alongside each other, but neither paying much attention to how the other is living.

The international athletics circuit has always been propped up by the shoe companies, so many athletes dependant on any level of support, sometimes just shoes and gear to give them a start and sense of belonging. While we were out competing, chasing times and medals, there was an even bigger competition taking place in the shoe world to find the best shoe company, and the founders of these sports companies were as competitive as any athletes on the track.

Adidas were always seen as sport specific and had a hold on international markets, while in Beaverton, Oregon, Nike were trying to make a mark after evolving from Japanese made Tiger shoes and sold under Blue Ribbon sports brand.

Just as Nike were making inroads, Reebok edged ahead with their soft white leather sports shoe that people couldn’t get enough of, the first sports shoe that went beyond the sports arena. Nike were reluctant to go down the leisure route, were more attracted to their bright coloured shoes and dabbling in high performance sports, but their first true love has always been running. The men who played there all came from a running background and never wanted to let that go.

Nike had always been aligned with running and athletics, until 1985, when Michael Jordan, who only ever wore Adidas, came in from basketball and saved Nike. Air was the cushioning pocket that was being tried and tested, but it was the Air Jordan that suddenly had rival brands under pressure: people were buying the iconic black and red shoes of the Chicago Bulls colours in any size they could get their hands on.

The shoe market took off for Nike, and it wasn’t about the functionality of the shoe anymore, but also the marketability. Poster ads for the Air Jordan were stolen from bus shelters as soon as they were put up, and it was no longer sufficient to get high profile athletes across all sports with influential fans to simply wear the shoes; there had to be a connection between the athlete and the fans, the athlete and the consumers. This was the birth of sports marketing as we know it today, and though still early days for Nike, they were soaring past Reebok and Adidas.

Even though I wore Reebok in college, one time we had no spikes in stock and had to go to the local store and choose shoes. We all chose Nike, believing they were the best, in part because some of best athletes in the world wore these shoes, including Mary Decker, then poster girl for athletics, the inaugural World Champion at 1,500m and 3,000m.

In some ways I wish I had read this book back when it was more relevant in my life, the players behind the scene and on the athletic field, although it all makes much more sense now. I first aligned with Nike in 1998, when I was out of contract, initially for no money, but championship winning bonuses.

The current shoe wars have been stalled in their tracks this year, with limited racing and competition. Tokyo was to be the big stage not just for athletes, but more than ever for the shoes, and not Air this time but carbon-fibre plates embedded in the road shoes and track spikes, Nike again leading the way.

When things resume every shoe company will be on a similar level playing field, but will we be cheering on the athletes or the shoes on their feet that are propelling them forward? That’s something in the background waiting to be written, not just the Swoosh but every major running shoe brand has a story to tell and athletes to back them up. I’ll be first in line to read that book.

1 James Ryan injury could open the door for Ryan Baird
2 Ken Early: Frank Lampard’s problems start at number one
3 Man United in talks with Dortmund over €100m deal for Sancho
4 Shane Lowry finds some welcome form as US PGA looms
5 All in the Game: Klopp gets the last laugh in quiz show
Real news has value SUBSCRIBE