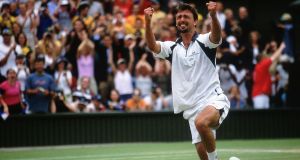 The mind can be a difficult place to bide time. Full of broken thoughts, there are corners of it in players where indecision lurks. Doubt hangs out. Conspiracy theories take hold. With Goran Ivanisevic, his demons and flaws almost became an alternative persona.

Almost exactly 19 years ago Ivanisevic pulled of the most unlikely Wimbledon wins of the modern era, when he survived six matches over the two weeks before he beat Australia’s Pat Rafter on the Monday of the third week.

“The trouble with me is that every match I play against five opponents: umpire, crowd, ball boys, court, and myself,” he once said, summing up his legendary persecution complex that was both a source of engagement and a barometer of the overcast depth of his mood.

Ivanisevic brought his idiosyncrasies with him each time he stepped on court and he’d rarely fail to expand on them when the match was long finished. His press conferences were capable of becoming one-sided monologues, conversations between Goran and himself. That’s if he turned up.

If he lost there was reasonable chance he’d find his way straight to a Wimbledon courtesy car venting with his team on his way to the airport, the £10,000 fine they’d slap him with for missing the official press conference worth not having to explain the malignant spirits that consumed him out on court.

If it rained it was because God wanted to punish him, or against Tim Henman in 2001 lavishly reward him, when the clouds were literally gathering. It was 2001 that defined Ivanisevic, and indeed Henman for a different reason. A win would have promoted the English player to being the first Briton to have made the final since 1938. But for that they had to wait for a Scot, Andy Murray, to come along.

In all things Wimbledon, Brit sensibilities are always lassoed into the fabric of the two weeks and it was Henman who played no small part in Goran’s shredding of the narrative in 2001 and his win over Rafter in the final.

It was Ivanisevic, on his way to his only Grand Slam win, who crushed Henman’s dream of a place in the final by battling back from two sets to one down to win in five sets in a rain-affected match that was played over three days.

Episodic in length, it began on the second Friday and ended on the Sunday, forcing the tournament into a Monday men’s final.

Henman had appeared on the brink of making the breakthrough on the Friday, when he came from a set down to lead. But the rain came and the players went in, the delay ultimately breaking Henman’s rhythm and grip on the match and working to Ivanisevic’s advantage.

It was the Croat who returned on the Saturday more steadied for ready tennis. Before the roof on Centre Court, further rain and another overnight forced the players into Sunday play as Henman’s composure began to fray. It took only 14 minutes for Ivanisevic to snatch his semi-final win – 7-5, 6-7, 0-6, 7-6, 6-3.

Typically throwing understatement aside, he was in no doubt as to how he resurrected his match to slay Henman. “This is destiny. God wanted me to win this game – he sent the rains,” said Ivanisevic.

But Rafter, seeded three for the tournament after Pete Sampras and Andre Agassi, was a different prospect. To everybody Ivanisevic had already sensationally over reached. Rafter, the previous year’s runner-up and a former US Open champion, had a game made to play on grass, while Ivanisevic was only at Wimbledon on invitation.

Ranked at 125 in the world, he was insufficiently high to earn an automatic place in the main draw of 128 players. He was only in the draw courtesy of a wildcard pick by the Wimbledon committee, perhaps historically their most astute act of discretion.

The reality was that when the tournament began, few observers would have questioned the view that the eccentric Croat seemed destined to be remembered as one of the greatest players never to win a Major title. Three times he had finished as the runner-up at Wimbledon, once to Agassi in 1992 and twice to Sampras in 1994 and 1998.

Even the Monday final brought its own unique atmosphere as 10,000 modestly priced tickets were sold on a first-come basis, making for a less well-heeled core of spectators, who were willing to turn it into a football-like atmosphere.

Rafter had his followers too. And the winner of the US Open in 1997 and 1998, was so keen to atone for his disappointment after losing to Sampras in the previous year’s Wimbledon final that he virtually scheduled his year to ensure he would be fit to compete in what was his last visit to the All England Club.

Both he and Ivanisevic had suffered ongoing shoulder pain with Ivanisevic scheduled to have an operation at the end of the season, the consequence of more than 10 years of booming down left-arm serves.

Ivanisevic was also known for hitting two first serves, a glimpse into his mindset that was hot wired to risk reward. It also kept his opponents speculating and cut points short for his serve-volley game and throbbing body.

For the first three sets, each player took the initiative with Ivanisevic breaking in the second game to go 3-0 up and secured the opening set after 29 minutes. Rafter broke for 2-0 in the second set and levelled the match after 59 minutes. After that Ivanisevic called for trainer Bill Norris to treat his shoulder after the fifth game of the third set, sparking a murmuring Centre Court about whether the trusty arm would hold out to the end.

Ivanisevic kept banging down his serves and broke for 4-2 with the Australian struggling badly in his efforts to make an impression. After 90 minutes, Ivanisevic seemed in control. But in the world of Goran, why make it simple?

Having saved a break-point with an ace, Ivanisevic was enraged when a foot-fault was called on his first serve while attempting to save a second set point. When he sent an angry one down for his second serve and it was called out he went apoplectic.

While the ball looked wide in the television replay, it didn’t to Ivanisevic. His serve broken for 2-4, he threw his racket, kicked the net, and raged at the officials.

“I was 30-0 up and played some stupid shots to put myself in trouble,” he said afterwards, “But that ugly lady gave me my first foot fault of the whole tournament, and then I hit a huge second serve, and a guy who looked like a little faggot, called it out.”

Even in 2001 they were ill conceived, offensive words. Rafter then broke a second time and squared the match. But Ivanisevic, appropriately self flagellated, regained his composure. Demanding specific ‘lucky’ balls for his assault, the match became louder and louder, Ivanisevic finally serving for the match at 8-7.

It was on the fourth match point he collapsed to the ground and turned, face down on the grass with which he had been having a running love-hate relationship. This time love and throughout the evening Ivanisevic could be seen stalking the gangways and stairs that crisscross the players’ area with just his shorts on. He’d thrown the rest to the fans.

“It was an unsolved mystery how I won,” he said. “But I felt after the second round that I was going to win. I could not say it loud because they would think I was completely nuts.

“I felt for the first time after so many months, actually a year, the racket [that I played with had a special sound]. I lost the sound for a year and a half and that [first] Monday I got the sound back. I said, ‘This is a good sign’.

“Wimbledon came and it was actually my time,” he added. “It was written somewhere that it was my time. I did everything in my life the harder way. Why do it easy if you can do it the hard way?”

A fitting epitaph for an unsolved mystery.