New Republic coaching set-up will entirely be based out of Abbotstown, which is a rarity 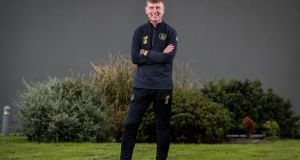 New Republic of Ireland boss Stephen Kenny and his coaching set-up will be based at Abbotstown. Photograph: Ryan Byrne/Inpho

Stephen Kenny says that as the rarest of things, an Ireland manager living in Ireland, he expects to have a wider input around Abbotstown. But the Dubliner insists that neither the description nor the demands of the job he has taken over from Mick McCarthy have fundamentally changed with his focus, first and foremost, still being to put out a winning senior international team.

“Ruud Dokter is the technical director,” he says, “and he’s doing a very good job behind the scenes, along with all of the underage managers. I don’t have the title of director. I’m the manager of the international team and that’s all I ever wanted to be. It’s a huge privilege and honour to do that.

“But since I’ve come into the organisation as Under-21 manager I’ve been a strong voice, and I think that’s recognised. Football needs to be at the centre of the decision-making process, particularly with the international teams at all levels. I articulate my views, and I think this just gives me a seat at the table if I require it.

“I don’t intend on attending all of the meetings, that’s not what I’m there for. But myself, Keith Andrews, Damien Duff, Ruadhri Higgins. we all live in Ireland. That’s never happened before, where the whole management team is based in Ireland. That office inside has probably been vacant a lot of the time, as managers have traditionally lived abroad but we will be based in Abbotstown.”

Kenny’s arrival coincides with a period of considerable upheaval around the association with a major reorganisation of senior management having been instigated by still interim CEO Gary Owens.

The 48-year-old has made sweeping changes of his own around the senior team set up, though, with stalwarts like Ciaran Murray, Tony McCarthy, Dick Redmond and Mick Lawlor departing in recent weeks as Kenny brought in new people, many of whom he has worked with previously.

The process continued on Wednesday as Gary Seery was appointed assistant to head analyst Ger Dunne. Danny Miller, who currently works with the Dundalk team, joins fellow chartered physiotherapist Kevin Mulholland while Colum O’Neill and Sam Rice have been recruited as athletic therapists.

And Shamrock Rovers equipment manager Mal Slattery is to be brought in alongside former Under-21 kitman and long-time Kenny associate Fergus McNally.

“They (the ones who have been replaced) are all good people,” says the manager. “It’s no reflection on them. They’ve made great contributions but . . . what I want to create is a really, really high performance environment. What is that? What does that mean? It means raising the standards in a lot of areas . . . a lot of areas.

“The people who contributed to behind the scenes, they all gave immaculate service, brilliant, terrific people. I don’t know them all but everyone spoke very well about them. They’re all lovely people, great people who made great contributions. But if you’re given an opportunity, a once in a lifetime opportunity, to manage your country, you have to be able to do it the way you would want to do it.”

1 James Ryan injury could open the door for Ryan Baird
2 Ken Early: Frank Lampard’s problems start at number one
3 Lockdown hiatus may afford way back for Waterford hopefuls
4 Man United in talks with Dortmund over €100m deal for Sancho
5 Series is gone but Kevin O’Brien and Ireland playing for ‘individual pride’
Real news has value SUBSCRIBE
Crossword Get access to over 6,000 interactive crosswords