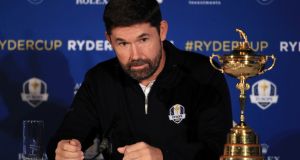 The 2020 Ryder Cup has been postponed to 2021. Photograph: Andrew Redington/Getty

The postponement of the event has been reported for a number of weeks but has today been confirmed with the Irish Open now likely to be rescheduled for the weekend of September 24th to 27th.

The news means that Pádraig Harrington will have another year to wait before captaining the European team at Whistling Straits while the 2022 event – scheduled to take place in Rome – has been pushed back to 2023, meaning the Ryder Cup will be played in alternate years going forward.

The European Tour have also confirmed the qualification process for the next Ryder Cup will be frozen until January 2021.

All qualification points already gained by European players between last September’s BMW PGA Championship at Wentworth, through to the Qatar Masters in March, will still count.

However no more qualification points will now be awarded until January 1st, with Harrington still entitled to three picks as captains.

As coronavirus case numbers continue to rise in parts of the US the hopes of having fans on the course at Whistling Straits were dwindling, particularly as the Memorial Tournament – which will take place on the PGA Tour next week – had to cancel their plans to have spectators present.

The news does represent a positive for the Irish Open which was due to take place in May but was postponed and is now likely to be rescheduled for Mount Juliet on the same weekend the Ryder Cup was due to take place. Given that daylight hours at the end of September will be less than in May the event may have a somewhat limited field.

Whether or not spectators will be present depends on restrictions that will be in place at the time. Currently gatherings of 500 people or less outdoors will only be allowed from July 20th onwards but tánaiste Leo Varadkar did say last month that gatherings of up to 5,000 people may be permitted in September. Were that the case it could be possible that a limited number of tickets are sold.

1 Crowd limits to remain at 200 as Government stalls move to phase four
2 Different Strokes: Bryson DeChambeau’s rules debates doing him no favours
3 Sporting Cathedrals: Cheltenham reveals all about the wonder of racing
4 Defending champion Rafa Nadal pulls out of US Open due to coronavirus concerns
5 Man United close to €100m deal with Dortmund after Jadon Sancho agrees terms
Real news has value SUBSCRIBE

Crowd limits to remain at 200 as Government stalls move to phase four 20:35
Ryan Brennan secures the points for 10-man Shelbourne in Donegal 20:18
Defending champion Rafa Nadal pulls out of US Open due to coronavirus concerns 20:40
GAA offer €40 refund after all intercounty season tickets are cancelled 18:51
Wigan will play in League One after losing appeal against 12-point deduction 17:40
Here is your handy guide to sport on television this week