We’re all eager to get back to our sports, but it takes just one outbreak and it’s game over 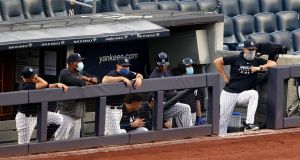 Sieving through all the health and safety documents and the return-to-sport guidelines can be incredibly fun. Out of the near-200 pages from the GAA/LGFA/Camogie Association, the FAI’s stuffed return-to-play protocol and the 200 pages supplied by various other sporting groups, it’s clear sport is on the right track.

The rules/guidelines are the new norms: wash your hands, wear a mask, maintain a two-metre distance between you and the next person (man markers, be warned). There are other things to do you would possibly forget about until struck with an obvious realisation. No spitting, no high-fives, no hugging, no celebrating, no bottle-sharing, no pre-game massages and just no real touching unless it’s impossible to not touch (defenders can breathe easy).

If you’re in any doubt, consult with a Covid-19 officer. In other words, God bless the new person in the high-vis vest who now has all the powers and can disrupt a whole sport with a few positive tests.

Professional sports’ booklets are extra meticulous. NBA has even gone to the length of talking about your poolside furniture and how that may kill you. But throughout every single document, which I’ve no doubt had input from the very best people with the most knowledge and intellect, there wasn’t a single mention about a dreaded second wave. Even writing it in print has sent me over the edge, so I apologise to all those I may have bummed out.

What it would take to bring down an entire season is one question they have not answered. Sure, we have the base covered for if individual players get sick and what that means for their club. The assumption is hoping they haven’t been involved in a game or near any other team and the impact that may have.

The fact of the matter is one single outbreak may cause few individuals to make a decision that not only disrupts players and athletes’ lives but has a financial impact that may see sporting organisations lose an insane amount of money. Sure, the Government grants will help across the board, but, given how much economists expect economies to shrink, the impact will be devastating and long-lasting.

What sports organisations have to account for is also something beyond their control. Apart from monitoring the hundreds of thousands of people involved in sport across Ireland, sporting organisations have to assess every area in terms of spikes and risks, potential breakout clusters, hospitalisations and everything else associated with Covid-19.

Some of the restarts might even start off on shaky ground. There could be several cases in rapid succession on one team or outbreaks on several teams at the same time. A top player could get sick. Once you start bringing in fans in higher numbers, you must even go as far as what could happen if the unthinkable were to happen and someone suffers complications and dies.

Major League Baseball (MLB) is the only sporting organisation in America which has allowed the season to go ahead as normal under regular Covid restrictions. Teams – just like in the GAA, the Premier League, La Liga and Bundesliga – are allowed to travel to and from games the way we have become adjusted to in Europe.

MLB and the players’ unions have given commissioner Rob Manfred the power to postpone the season under one of three conditions: if governments impose travel restrictions throughout the United States; if the circumstances pose “an unreasonable health and safety risk”; or if the number of players who are unavailable because of Covid-19 becomes so great that “the competitive integrity of the season is undermined”.

The criteria are incredibly vague and open to interpretation on all accounts. How can you define an unreasonable risk or even begin to comprehend how the competitive integrity of the season becomes undermined?

The only thing that has become predictable is how unpredictable the virus is. While Ireland is keeping numbers somewhat subdued, the country has only begun to restart at an already rapid pace. With some areas of the public still unsure about public safety guidelines and reportedly turning down tests despite being in contact with an infected person, we can only guess as to what would happen in a few weeks or even a month.

The PGA Tour got the public go-ahead to allow fans at next week’s Memorial Tournament in Dublin, Ohio, but on Tuesday night, as the US hit a record 60,000 new cases in a day, those plans have been scrapped. Add to that the confusion over testing and players pulling out over positive tests.

Just like everyone else, I’m absolutely famished without attending sports, and I can only hope that the trend to flush out the virus continues; but really, all it takes is one symptomatic/asymptomatic person to go undetected and kick off another debacle. We all are waiting with bated breath, somewhat hoping for the best, but unsure what to expect.

1 Mikel Arteta given more control at Arsenal as Raul Sanllehi leaves
2 Inside the world’s largest sports air dome just outside Knock
3 Worst sporting moment: White knuckle ride on a hate-filled night at Windsor
4 ‘Historic humiliation’: Spanish press reacts to Barca drubbing
5 As ever, Ronnie O’Sullivan sparks debate at the Crucible
Real news has value SUBSCRIBE
Here is your handy guide to sport on television this week