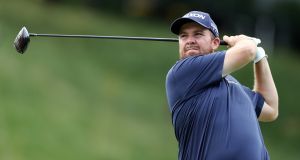 Northern Ireland’s Shane Lowry plays his shot from the 18th tee during the first round of the Travelers Championship at TPC River Highlands on June 25t in Connecticut. Photograph: Rob Carr/Getty Images

Another week of silence, with again no crowds allowed at the PGA Tour’s latest stop for the Workday Charity Open at Muirfield Village in Ohio, but a tournament where Shane Lowry is aiming to create some noise of his own. That is, if he can get his putter to heat up.

The 31-year-old’s form since the US circuit restarted has been more stop than go, with the British Open champion missing two of three cuts. Lowry failed to make the weekend at either the Colonial or the Heritage, while he had what he termed “an average week” at the Travelers where he finished a lowly tied-60th.

“I went into The Players [in March] and I was feeling great about my game, though I didn’t have a great opening round,” recalled Lowry of that tournament at Sawgrass which was pulled after the first round due to the coronavirus pandemic and which resulted in a three-month shutdown on tour.

Lowry, speaking to the Golf Channel, continued: “I’ve come back out, missed two of the three cuts, but, all in all, I feel like my game is really good. I’ve just struggled on the greens a little bit and I just need to build up a little bit of confidence. I feel like I’m right where I want to be, it’s just on the greens I need to improve.”

If the temptation is to slam the foot on the pedal to get going, Lowry has decided patience is the key: “The last few weeks I’ve struggled on the greens. Tee-to-green, I’ve been fine. If I can just get better on the greens, I feel I’ll be there or thereabouts. It’s all about waiting for it to happen and just not trying to force it too much. I sometimes can force it too much and try too hard, so it’s just about trusting the process and waiting for it all to happen.”

Graeme McDowell, who missed the Travelers and self-isolated after his caddie Kenny Comboy tested positive for the virus, returns to action for the back-to-back tournaments at Muirfield Village, with this week’s Workday tournament followed next week by The Memorial. Plans to have spectators at The Memorial have been shelved, due to rising cases of the virus in Ohio.

Lowry is grouped alongside Americans Matt Kuchar and Davis Love III (tee-time 12.23pm Irish time) for the opening two rounds, while McDowell – who has missed both cuts, at the Colonial and Heritage, since the PGA Tour’s return – has Joaquin Nieman and Michael Kim (6.32pm Irish time) for company, in a tournament where Jon Rahm has yet another opportunity to leapfrog Rory McIlroy into the world number one spot with a win.

The European Tour’s reboot arrives slightly ahead of schedule, with the Austrian Open at the Diamond resort near Vienna. Gavin Moynihan, Niall Kearney and Robin Dawson are the three Irish players in the field, on a course where Dutch player Joost Luiten has earned a reputation as something of a specialist while Austria’s Markus Brier is looking to become a four-time champion of his national title.

The Austrian Open marks the first week of the comprehensive health strategy on the tour that features rapid on-site coronavirus screening. All players, caddies and other on-site personnel are being tested using Cignpost’s screening products, consisting of a dry swab to collect oral and nasopharynal samples using mobile PCR diagnostic equipment with results available within two hours.