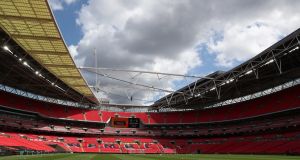 Leinster and Ireland could be without James Ryan for up to 12 weeks leaving him in a race against time to be fit for Ireland’s re-arranged 2020 Six Nations games against Italy at the Aviva Stadium on October 24th and France in Stade de France a week later. The young lock is almost certain to miss the remainder of Leinster’s season, which is liable to mean more game time for yet another St Michael’s secondrow, Ryan Baird. In his column this morning, Gerry Thornley explains how the Irish system will face its acid test with the front-loaded return to action over the coming months: “it’s not so much the length of this 50-week campaign nor even, perhaps, the number of games players are exposed to. More, it’s potentially the unrelenting high stakes and additional demands which will be placed on players this season, and that it is so uniquely front-loaded.”

Manchester United are in advanced negotiations with Borussia Dortmund to sign Jadon Sancho for an initial €100m, which would break the record fee for an English player they set last summer when signing Harry Maguire for £85m (€94m). All eyes will be on Wembley tonight as Brentford and Fulham clash in the Championship playoff final, in what still remains world football’s biggest financial, winner-takes-all prize match. That kicks off at 7.45pm. Last night in the Airtricity League, Derry City got back up and running at Richmond Park with a 2-0 win over St Patrick’s. They bounced back from Friday’s defeat to Sligo Rovers and showed more energy and desire than St Patrick’s who were a shadow of the side that earned a point at champions Dundalk the same night. Tonight, Finn Harps host Shelbourne and Sligo Rovers are at home against Waterford.