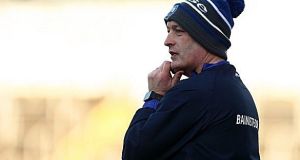 Waterford manager Liam Cahill has said the panel would remain open and players’ form with their clubs would continue to be a factor. File photograph: Inpho

The two most eye-catching decisions involved in Liam Cahill’s first Waterford panel named at the end of last year were the omissions of former All-Stars Noel Connors and Maurice Shanahan, both not at that stage 30.

Whereas there was shock locally, Cahill also had his advocates in the challenge of reinvigorating Waterford after two years of failing to win a single championship match.

The former Tipperary player and under-21 winning manager took a firm line on the issue when talking to Malachy Clerkin in these pages last January.

“Now, whether that changes over time depends on these players showing me something different. I know that doctors differ and patients die but I can do no more than go with my own instincts based on performances. For me, these were not big calls. And in fairness to Maurice and Noel, they were very respectful when I rang them up to speak to them.”

The new Waterford manager had said from the start that the panel would remain open and players’ form with their clubs would continue to be a factor.

At the weekend Shanahan was is in phenomenal shooting form, as Lismore saw off Fourmilewater in the Waterford championship, ending the day with 2-17 – including 1-3 from play.

It raises an issue that will be common to many counties. In this strange year, managers are in the unusual situation of having the evidence of a whole county championship to help with decision making.

Some players have returned from overseas travel whereas others have had a free five months to recuperate from injuries. To what extent will county panels be revisited after a lockdown in which they were working individually and at times collectively on fitness programmes?

For one of Cahill’s predecessors, Derek McGrath, who took the county to the 2017 All-Ireland final, there are enhanced possibilities for management and not just in Waterford.

“Will Liam go back for Shane Bennett, who wasn’t involved earlier in the year? Tadhg de Búrca’s coming back from injury. A lot of managers seem to be treating it as a new season. For example Cha Dwyer and a couple of others who were travelling are now available to Laois manager Eddie Brennan. This may act as a catalyst for teams to look again.

“It’s not straightforward. Teams have been going since the end of last year and through a number of weeks in the league. They’ve been doing their programmes during the lockdown. Do you say one or two changes are enough or revisit other decisions?”

The brevity of the scheduled inter-county season – allowing that it actually takes place amid current public health uncertainties – could also be an incentive for players, reluctant to commit to the rigours of inter-county training for a full year.

On the question of Shanahan, McGrath feels that the player is capable of rejoining the county panel but says that it’s up to Cahill, who has been conspicuously in attendance at all championship matches featuring county panellists, which will give him a good picture of who is in form.

“He’s young enough and healthy and fit enough. It’s up to whether Liam wants to revisit his earlier decision and that’s his prerogative.”

Last Saturday, his free taking was exceptional - 1-14 from 15 attempts – and he understudied the county free taker Pauric Mahony when the latter was out with injury during 2015.

“He has a lovely technique,” says McGrath, “and he’s worked very hard on the visualisation process. He has a set technique – keeping the ball on the hurley for two or three seconds and he steps into it. He’s very serious about his hurling.

“In 2019 I saw him playing in a club match in Cappoquin against Ballyduff Upper and they double- and treble-marked him, but when he’s in the mood he doesn’t care how many people are around him. He’ll feel he can win those battles.”

One of Shanahan’s major strengths is his physical power and ability to win ball in the air and when being team marked. In his All-Star year, 2015, the All-Ireland semi-final against Kilkenny saw him fending for himself in an often lone role up front.

In that year’s Munster semi-final against Cork he provided a text-book example by winning a ball over Damian Cahalane’s head and slotting a goal.

The question is whether his combined skill sets can still find a place in the vision Cahill has for the team.

That ability to win high contested ball isn’t abundantly available in the county but another knock-on effect of the lockdown may dilute that advantage. Tadhg de Búrca’s return from serious injury means that he will probably return to centre back, freeing up former Hurler of the Year Austin Gleeson to go up front where he would be well capable of winning ball.

It means more decisions to be made by Cahill but he’ll welcome the enhanced options.