Something has to give, or else the majority of the players’ bodies and minds will 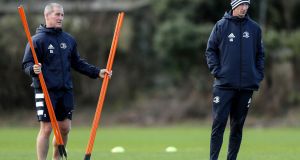 Both the 2020-21 Pro14 and European club competitions will be trimmed to accommodate these abnormal Covid-19 circumstances. File photograph: Inpho

Seven months later, along with a few other well-managed Irish front-liners, they were integral parts of a Lions test team which drew the series in New Zealand.

The Irish player management system is well lauded and was undoubtedly a contributory factor towards Sexton and Furlong being two of 11 to make the tour and two of seven who contributed to the drawn test series.

All told, Sexton played 15 games in that 2016-17 season before the Lions tour, 10 with Leinster and five with Ireland, while Furlong played 24 in total, including eight starts for Ireland and three off the bench for Leinster.

However the Irish system is going to face its acid test over the forthcoming 50-week campaign, given the need to compress up to seven weeks of the 2019-20 Guinness Pro14 and Heineken Champions Cup into what would normally have been the start of the 2020-21 season.

Sure, both the 2020-21 Pro14 and European club competitions will be trimmed to accommodate these abnormal circumstances, but it’s not so much the length of this 50-week campaign nor even, perhaps, the number of games players are exposed to.

More, it’s potentially the unrelenting high stakes and additional demands which will be placed on players this season, and that it is so uniquely front-loaded. All the more so after an unprecedented, enforced five-month lay-off.

Normally, with the arrival of the opening two rounds of the Champions Cup in December (which would normally have been the back-to-back rounds three and four) frontline internationals would have played, at most, up to five provincial games, including one big derby, and two pool European games.

Come December 2020, some of Leinster’s frontline internationals could have played at least one big derby against Munster, a semi-final and final of the Pro14, along with a Champions Cup quarter-final, semi-final and final, with the latter the week before the first of two potentially title-defining Six Nations games.

Then, after a week’s rest in the first week of November (at face value the only token gesture to player welfare) Ireland play four successive tests in this new-fangled, one-off, TV income-generating autumnal ‘tournament’. In other words, Leinster’s frontline internationals could be asked to play a dozen games before those European games in December, including six test matches instead of three, and up to five big provincial knock-out games.

Clearly, something has to give, or else the majority of the players’ bodies and minds will. Of course, this schedule is a case of needs must, and the priority is the two re-arranged Six Nations games against Italy and France, along with the autumnal tournament and the 2021 Six Nations.

The international game accounts for over 80 per cent of the IRFU’s funding module and so the priority is for Sexton, Furlong, Murray and Stander et al to play for Ireland. And even if they play in three of the four November/December games, that still adds up to 10 tests.

This in turn leaves room for maybe a dozen or 15 provincial games, and it’s already been made clear to the provinces that unlike previous seasons, frontline internationals may not be available for all European games, much less regular season matches in the Pro14.

So, in some respects, Andy Farrell and the Irish management may consider it a blessing that Munster went out of Europe in the pool stages, even if Johann van Graan may not agree. Meantime, Farrell and Leo Cullen could, for the first time, be having some very difficult conversations.

This is partly because Sexton, Furlong, Cian Healy, Robbie Henshaw, Garry Ringrose, Jordan Larmour and all their Leinster teammates will desperately want to play in any Pro14 or European knock-out match if it comes to it.

As things stand, 19 wins out of 19 games have ensured Leinster of both a home semi-final in the Pro14 and a home European quarter-final against Saracens. Having earned top seeding going into the knock-out stages of the Champions Cup, victory over Saracens would ensure Leinster of a home European semi-final as well, against the winners of the Clermont-Racing quarter-final.

This year’s Champions Cup final has been moved from its intended venue, the Stade Velodrome in Marseilles, and only on foot of the quarter-finals being completed will the tournament organisers, EPCR, decide upon the final venues which will then be under consideration.

Similarly, the Pro14 organisers will look at their options to replace the Cardiff City Stadium for the 2019-20 final after the semi-final line-up has been decided, but given the possibility of three Irish teams being in the last four, there’s every chance the final will be held in the Aviva Stadium.

Conceivably therefore, were the European final also to be held there (and the Aviva will obviously be under serious consideration) then through a combination of their own performances and circumstances, Leinster could have five knock-out games at their home venue to complete a double which they’ve only ever completed once before.

No player, not least their captain, will want to miss out on any of those games and that shot at history.

There’ll have to be compromises along the way for that to happen, and on both sides. Leinster will have to rotate in their opening two rounds of interpros upon the resumption at the end of this month and again come December, but so too should Farrell to some degree in November.

In any event, Leinster may well have to dig deeper than ever before. In the double-winning campaign of 2017-18 they used 55 players over the course of the season, and last season it was 57, including nine debutants for the academy.

Those numbers could be eclipsed over the course of the next 12 months. It will be fascinating to see how it pans out.