James Ryan injury could open the door for Ryan Baird 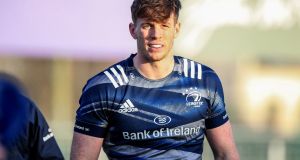 James Ryan would appear to be in a race against time to be fit for Ireland’s re-arranged 2020 Six Nations games against Italy at the Aviva Stadium on October 24th and France in Stade de France a week later.

Leinster have estimated that Ryan “will be out of action for up to 10-12 weeks” due to the shoulder injury the 24-year-old lock sustained in training, and the Italian game is effectively 12 weeks from now.

Leinster are due to host Saracens in the quarter-finals on September 19th, which is seven weeks from now, while the semi-final weekend is just a week later and the final, were the province to progress that far, is 11 weeks from now.

Of course, Leinster’s chances of reaching the final for a third year in a row have been dealt a damaging blow with the loss of Ryan, who is the one lock best equipped to match the energy, athleticism and all-round impact of Maro Itoje.

That said, they are well stocked in the secondrow, with Devin Toner, Scott Fardy and Ross Molony, while Ryan’s injury is liable to mean more game time for yet another St Michael’s lock, Ryan Baird.

Recently turned 21 and already called into the Irish training squad, in Leinster’s last outing before the lockdown Baird scored an eye-catching hat-trick in the 55-19 win over Glasgow and in the eyes of many current and former players, is regarded as a viable long-term partner for Ryan with both Leinster and Ireland.

Leinster are also resigned to being without winger Adam Byrne for up to 12 weeks due to a hamstring injury he has suffered. He is due to undergo “a procedure” this week.

Peter Dooley (shoulder injury) is aiming to return to training in the next two weeks while another prop, Vakh Abdaladze, suffered a recurrence of his back injury and is seeking further opinion before a course of rehabilitation is decided upon.

Against all of this, Leinster report that Dan Leavy is “continuing to integrate gradually into rugby training” after the significant multi-ligament knee injury he suffered in last season’s Champions Cup quarter-final win over Ulster in March 2019.

James Lowe also returned to training last week having followed all government health advice and guidelines upon his arrival back into the country from New Zealand.