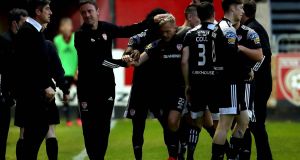 A goal on his debut from new signing James Akintunde and a second from captain Conor McCormack got Derry City’s season back up and running at Richmond Park.

Declan Devine’s visitors empathically exorcised the ghosts of Friday’s disappointing home defeat to Sligo Rovers as they showed more energy and desire than St Patrick’s who were a shadow of the side that earned a point at champions Dundalk the same night.

Having solemnly observed a minute’s silence in memory of their club president, John Hume, Derry did start a little sluggishly with goalkeeper Peter Cherrie worked inside six minutes.

St Patrick’s skipper Robbie Benson made space to find the target from just outside the area with a crisp right-foot drive to force the save in what would prove the main note of a fitful first half.

With a good shape and purpose to their approach, Derry played their way into the game as they troubled St Patrick’s for the first time on 20 minutes.

Midfielder Joe Thompson swivelled on the edge of the area to curl a shot not far wide after probing link play down the right between McCormack and the hard-running Akintunde.

As half-time approached St Patrick’s were caught napping again down the right as Derry appeals for a penalty went unheeded when Akintunde appeared to be impeded in the area by Shane Griffin as he raced to the end line from McCormack’s ball over the top.

Though they enjoyed decent spells of possession, St Pat’s had plenty of food for thought at the interval as they laboured to create much else in the final third following Benson’s early chance.

Their manager Stephen O’Donnell duly made a change at the half-time bringing Jason McClelland in on the right of midfield to replace the ineffective David Titov.

It mattered little, as Derry’s general pattern of the first half was maintained with their deservedly taking the lead four minutes in.

Right-back Colm Horgan got forward down the right to combine with Jack Malone whose low cross was swept low past Clarke to the far corner of his net by Akintunde.

St Pat’s needed a response and a bout of pressure almost delivered it seven minutes later as Cherrie had to be fully alert to add to his first half save from Benson when tipping away an in-swinging shot from Jordan Gibson.

McClelland then blasted just over as St Pat’s searched for a cutting edge which didn’t materialise before Derry then struck for their killer second goal on 72 minutes.

Figueira set up McCormack who picked his spot sublimely from 20 yards out, finding the far right corner of the net with a precise low drive.