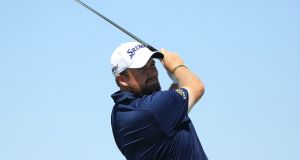 Ireland’s Shane Lowry plays his shot from the 13th tee during the first round of the US Open at Shinnecock Hills Golf Club in Southampton, New York. Photograph: Mike Ehrmann/Getty Images

The putter was like an alien being to Shane Lowry as he ran up one four-putt and three three-putts in an opening round 75, five over, in the first round of the US Open . . . but that was the only part of his game that was out of sorts on a tough day for competitors.

“I can’t play any better golf than that,” insisted Lowry, who was ranked second in greens-in-regulation, finding 13 of 18. Only Henrik Stenson was ranked ahead of him in that category.

But the bottom line is the number which goes on to the scorecard is what most matters, and Lowry’s problems with the putter left him tied-47th and playing catch-up going into Friday’s second round.

“I put myself in the right position on most holes but I struggled on the greens. I don’t know what anyone else thought of them, probably the worst greens I’ve seen in a long time . . . it is mentally draining,” he said.

To emphasise the point, Lowry claimed that, in watching his playing partners hitting putts, the ball was jumping “four inches off the ground” as the poa annua surfaces crusted up for the later players .

“Look, there’s no point me standing here making excuses. It is as it is, and hopefully tomorrow they will be nice and fresh. I had a bit of a disaster on the greens but I was proud of myself, I hung in there,” said Lowry, who finished six shots off the pace set by a quartet of players.

Dustin Johnson, the world number one, Scott Piercy, Russell Henley and Ian Poulter were the only players to shoot sub-par rounds on a tough opening day when the wind swirled around the landscape. The four joint-leaders shot 69s, one under, on a day when the average score was 76.2 and a number of players – among them Rory McIlroy (80), Tiger Woods (78) and Jordan Spieth (78) – struggled.

Lowry was not alone in suffering a four-putt, as Woods also suffered the same fate. “I just didn’t putt well,” said Woods, playing in the US Open for the first time since 2015. “In the past four tournaments I think, I have not putted well. So if I can putt like I did at the beginning of the year, we’ve got something. I just haven’t done it.”

Johnson, a winner last week in the FedEx St Jude Classic, continued that momentum with an opening 69. Although he only found nine of 18 greens in regulation, he was helped along the way by holing out from a bunker on the eighth. “I drove it well. I hit a lot of quality iron shots and my short game was good. The greens are difficult, difficult to get it close and difficult to hole putts. I felt like I did a good job.”

Graeme McDowell too experienced a tough time, signing for a 79 and suffering a bizarre incident on the second, his 11th, where a recovery shot from a greenside trap clipped the flagpole only to spin back and return down the slope to the bunker.